Ruling: Hobby Lobby Can Have a Conscience 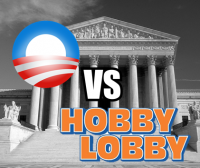 The Supreme Court just threaded the needle on a so-called “Catholic issue.”

In the long awaited Supreme Court decision in the Hobby Lobby case, the Court by a 5-4 decision divided along conscience vs. “War on Women” lines.

This could be considered by some as a narrowly tailored decision rather than a broad Constitutional declaration. The long and the short of the decision is that small, family owned or owned by a small group (closely held corporations) have a right to exercise their conscience outside of the sanctuary out in the public square.

The court recognized that the government was imposing one position on this moral issue when it had other ways to pay for the abortion-inducing drugs that the families who own Hobby Lobby and Conestoga Wood corporations found morally repugnant. Surely the massive Health and Human Services budget has funds enough to pay for the three pills and one device that destroy the life that biologists would tell us begins at conception.

One of the GOP commentators and former Bush 41 campaign guru, Karl Rove, said today that this should help Republican party candidates in “Catholic states.” Everyone must know, he seems to be saying, that abortion is a “Catholic issue.” Neither the Green family (Hobby Lobby) nor the Hahns (Conestoga Wood) are Catholics. Neither of these business owners seemed to be concerned about contraceptives in general, but only ones that would induce abortion.

The old Rockefeller Republicans (used to be called the Country Club set) has a real problem with the rise of the “religious right.” They have made the case often that one needs to be more “moderate” on social issues. They seem to be saying “Do you want another progressive (liberal) like Mr. Obama in the White House? If not, encourage GOP aficionados to soft pedal the social issues and stick to the economic and foreign policy problems.”

The Case according to Justices Alito and Kennedy

How the worm has turned. Justice Samuel Alito returned the favor today by writing the majority opinion in the Hobby Lobby case. During President Obama’s State of the Union address, the president took the Supreme Court to the woodshed for getting it wrong on campaign finances in the Citizen’s United case. As the president upbraided the justices who were sitting quietly in front of him, Alito used body language and mouthed complaints, in full view of the banks of cameras chronicling the event.

It is important to note at this juncture, without hacking and slashing along in the jungle of legalese, that Justice Kennedy (in a concurring opinion) expressed his concern that the HHS mandates might be a premonition of things to come. He was concerned that appointees and unelected bureaucrats would continue using their personal discretion (or as the President might say, “using their pen and their cellphones”) unless the Court discouraged such unilateralism.

A radical proposition undergirds the administration’s definition of “change.” They let the unaccountable public officials bully not just corporate millionaires but the little guy too. Case in point: Lois Lerner’s Internal Revenue Service (IRS). Bullying the Little Sisters of the Poor was a public relations nightmare for the Federal government. In the Hobby Lobby case, the Court seemed to be saying that family owned businesses should not be intimidated by appointed official and bureaucrats bullies who use regulations and executive orders to run roughshod over basic legal rights guaranteed under the Religious Freedom Restoration Act (virtually unanimously approved in both houses of congress and signed by then President Bill Clinton in the 1990s.)

The bullying has been temporarily halted by this case. When seen in tandem with yesterday’s case involving “buffer zones” to limit free speech (without evidence the 35 feet rule is needed to protect against “violence” by rosary- and Bible-wielding “radicals”) the President has been put on notice to overreach at his peril.

For all of the celebration about Religious Freedom, one might ponder the reality that this 5-4 decision might be a much limited decision than meets the eye.

The Supreme Court threaded the needle: The majority on the Court voted for a narrowly “tailored” remedy under law which, like any law, can be modified or repealed. Herein lies the rub. The Rule of Law principle (no person should be treated as a second class citizen) is regularly being eroded by those who would say we will use government’s power to muzzle the public if it gets in the way of doing what “our benevolent father in D.C.” feels is good for the nation.

The Hobby Lobby case, along with a few others, demonstrate that the Court will not be bullied when citizens’ rights are arrogantly being trampled into the dust, if other remedies to deal with the situation are available.

More on this to come.