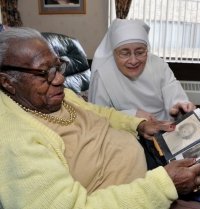 In Little Sisters of the Poor Home for the Aged v. Sebelius: Silence is not an Option

On December 31, Justice Sonja Sotomayor issued a temporary injunction relieving hundreds of non-profit religious groups from HHS Department rules requiring them to provide abortion-inducing contraceptive drugs to their employees through federally mandated insurance plans. In an October 2 interview for National Review on Line, Sr. Constance Veit, L.S.P., Communications Director for the Little Sisters of the Poor, was asked by Kathryn Jean Lopez, “Why are you getting involved in politics?” Sr. Constance replied “for us this has nothing to do with politics. It is a question of respect for every human life created in God’s image, and of fidelity to the teaching of the Roman Catholic Church, and our religious vows.”

The Little Sisters were hardly alone in their legal actions against the contraceptive mandate. The Alliance for Defense of Freedom (a religious liberty law firm) reported on January 2, 2014 the breadth of litigation. It found 61 rulings touching on the merits of religious freedom claims 41 of which involved family or religious run businesses and 20 non-profit religious organizations. Overall, in these cases, there were 54 injunctions against the mandate and only 7 supporting it.

The Sisters were being criticized for spending millions of dollars in legal fees to bring the suit when the money could have been better spent on taking care of the poor. These critics seemed to have missed the fact that the Little Sisters were being represented pro bono (at no charge) by the Becket Fund for Religious Liberty. These naysayers reminded me of comments by atheist writer Christopher Hitchens, in 2003, during Mother Teresa’s beatification ceremony, that she was nothing but a publicity hound. Evidently, when some people can’t win an argument, they resort to name calling.

The Department of Justice denied requests by the Sisters for exemption from the provisions on the grounds that the provisions did not violate their religious freedom.
The administration and supporters of the law argued that the mandate was constitutional and needed for women’s health. “Women’s Health” of course is the term supporters of abortion used in Roe v. Wade as the ultimate justification for abortion. By that logic, pregnancy is a disease.

The Department of Justice in the denial of the Sisters’ request for a waiver, claimed that the regs. exempt churches and don’t make religious nonprofit organizations “contract, arrange, pay for, or refer for contraceptive coverage.” It is amazing to think that the administration had the audacity to resurrect the old canard that, “none of your money will be spent on the offensive services.”

A number of years ago my wife and I spearheaded an organization in Missouri called Citizens for Clear Conscience Giving. A local umbrella charity had included a family planning clinic in its group of charities for which it collected community funds. When the citizens group objected and ministers and clergy throughout the area signed petitions and bought advertising space in newspapers, the umbrella charity first said, the clinic didn’t do abortions. In fact that was true but they assisted women to get them in other places.
Next, they said, “Well, none of your dollars will go to any services related to abortion.” But they would not say that the clinic would not get money for lights, heat and so forth. One of our friends made the perfect analogy to this charade. She said, her dad told the kids in the family that they would receive their allowance only if they promised that none of that money would go for cigarettes. The kids of course agreed, and spent their money from their paper routes and lawn-cutting jobs to buy the cigarettes. Thus the dad helped the kids to pay for movies, snacks, and so on with their allowance and made it easier for them to buy their “coffin nails” with other funds. All the money went into the kids’ pocket. An economist would say that the funds were fungible. A buck is a buck.

The Little Sisters understood they were being asked to be complicit in helping their employees to procure contraceptives, sterilizations and the likes. Their option to just opt out of the insurance programs involved draconian penalties. The fines would be $100 dollars a day per employee. For just one home with say 50 employees, the fines would be $2,000,000 per year. Since the Little Sisters operate 30 such homes, it is clear that contributors would be paying not just for the care for the poor, but the fines as well. It was estimated by the LA Times that the Little Sisters were subject to fines of $6700 per day.

It became clear to the Federal government that the Little Sisters had created a public relations nightmare the administration. Changes were made to the original regulations which were designed, supposedly, to shift the responsibility of providing the coverage from the religious institutions to their insurance administrator or some third party. This “accommodation” unfortunately did not solve the problem for a number of reasons. For one thing, the Little Sisters were insured by Christian Bros. Insurance which had similar problems with the mandate. In addition, the Sisters, in signing an agreement to let others pay for the services, still left themselves complicit in arranging for contraceptives, sterilizations and similar immoral services for their employees.

With so many courts around the United States involved it should be no surprise that the Supreme Court will be weighing in on this soon.

The Little Sisters concluded that their silent service to the Poor wasn’t enough. As St. Francis reportedly said. “Preach the gospel always, when necessary, use words.” The time for words has clearly come.