St Joseph: Modern Model for Listening to the Lord 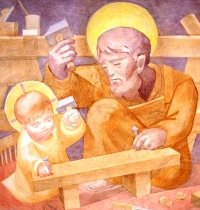 In this electronic media age that we live we encounter so many words, written, spoken and too often yelled at us without really absorbing the message. Generations since the creation of Facebook have been encouraged to share everything from what they had for breakfast to what they saw last night in yet another “reality” show. As we often mindlessly surf the web and add yet another BFF to list of Facebook friends and followers we live in the moment with little context to guide us.

With so much chatter to deal with how can we discern God’s will for us?

The scriptures are notably quiet about the foster father of Jesus. Not a single word he said is recorded there. Scripture does tell us that he was a descendant of David the line from which the Messiah was to come. We know he lived in Nazareth, was espoused to Mary. Further, we know that he led them into Egypt to avoid Herod’s plans to kill the infant Jesus. We know he went with his Holy Family to Jerusalem, noticed he had lost his son and anxiously sought him out back in the temple.

We are also reminded that Jesus returned to Jerusalem and “was subject to them” (Jesus and Mary) The model of parent child relations with Jesus as the model son would be a wonderful adventure for someone out in the blogosphere to undertake.

We are also reminded of St. Joseph’s role as “Guardian of the Redeemer” (Redemtoris Custos) by Blessed John Paul II’s in an Apostolic Exhortation by that name.

The letter presents him as:

a) Guardian of the mystery of God,

b) Just man and husband,

c) Role model for using Work as an expression of love,

d) Cultivator of the primacy of the interior life, and

e) patron of the Church in our day.

As we are selecting reading for our family, school, and parish groups to use during Lent to become closer to what we are all called to be. Any member of our family, not just the father, could benefit from examining at least one of these areas to emulate.

While we cannot be patrons of the Church in the Modern World, we can share our love for the faith with others. Given the pressures today to expunge God from public discourse, we can at least emulate Joseph’s unquoted example of following God’s plan in love of family and neighbor.

He did not wait for a bolt of lightning or a voice from the clouds, to conform his life to God’s call. Mary had the advantage of being able to give her Amen to God’s plan (“be it done to me according to your word”) was in response to an angelic apparition. Most of us won’t have to be concerned that God will only talk to us that way.

Joseph was, like my own father Joseph J. Kessler, MD, a quiet man. After Dad died all of us were quoting his sayings to others. You know, as Dad used to say.” Our dear Mother, who knew him better by far than any of his nine children often said with her Irish grin that his name wasn’t “Gabby.” “Your father,” she would say, “taught by example.”

His medical practice was a one man shop and he often saw 80 patients a day. His hours were in the evening because his patients were poor and could not afford to take off work. He told all of us that the family was going to serve the poor so he would not be able to help with college since he took on so many patients who could not pay and he gave the poorest shots and medicines at no charge. His work as his patron saint Joseph was his expression of God’s love for all of God’s children.

When he was laid to his rest, all too soon, we had to have two funeral masses — one at the home parish, and one at the Holy Trinity Church near his office on 14th street. Jake McCarthy, a writer for the St. Louis Post Dispatch in an article about heroism said Dr. Joe was one of his greatest heroes.

St. Joseph was no less prophetic a scriptural character than any of the great prophets of the Old Testament. He always reminds me of Samuel hearing voices in the night. When Samuel responded to what he thought was the voice of his father and went to his father, the Prophet Eli during the night he said to him, “you called me?”

Eli first told him to go back to bed. After several trips Eli realized it was the Lord speaking to his son. He told him if he heard the voice again he should say “Speak Lord , your servant is listening.” Joseph was a New Testament type of Samuel to me.

He, unlike Samuel,was a mature man of faith who listened intently for the call of the Lord from wherever it might come. How often do we hear the voice of God but in this noisy world have a problem discerning through the din? How frustrated Jesus would become later on in his public ministry at those who sought signs.

How many of us are like the famous movie character Bruce Almighty who kept asking God for a sign when there was a truck loaded with signs right in front of him? Lent might be an opportunity for all of us to emulate Joseph and aspire to his listening skills.

For the Italians among us who are celebrating at the St. Joseph’s Table and for all who were blessed with a Joseph in their lives this should be a day of prayerful thanksgiving for their lives, examples. All five of my brothers, two of our sons, and a grandson have Joseph somewhere in their names.

We could do well to ask the Lord for the grace to see and emulate Joseph for the role model he was for listening for to the word of God, praying for discernment in our interior lives, and making our “work” an act of love. No easy tasks these, but then this is Lent.