Suicide and Faith: My Story 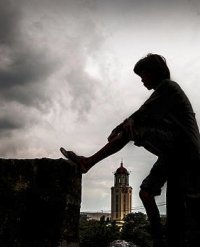 By Eileen Wittig | Benedictine College senior Eileen Wittig interns, and blogs, with C-Fam’s International Youth Coalition, where she first wrote about this topic.

“Man cannot live without hope,” said Dr. Aaron Kheriaty. The Benedictine College Gregorian Fellows invited Kheriaty to suicide and hope. He is an Associate Professor of Psychiatry and Director of the Program in Medical Ethics at the University of California-Irvine School of Medicine, and his lecture drew a crowd that filled the room.

“Man is the only animal who takes his own life,” he said, and cited research that named the one factor suicide victims have in common: hopelessness.

There has been a lot of coverage of depression and suicide in the news recently, largely due to Robin Williams. By now it is common knowledge that he had Parkinson’s and that depression is an effect of the disease. People have been writing and speaking on depression as a physical illness, highlighting the fact that it needs to be treated as such.

As someone whose depression is caused by an imbalance of chemicals in the brain, it is relieving to me to see that people are starting to understand depression as a physical issue rather than a purely psychological one, one that people should perhaps be able to voluntarily fix. As someone who has faced and fought the potentially fatal effects of having depression, it’s nerve-wracking to hear about the topic so often. As a Catholic, it’s even more complicated.

The Catholic Church has always condemned suicide. For the first millennium, before science showed that depression —and thus suicide—could often be physical illnesses, the Church also condemned those who committed suicide. In response to the severity of the sin, the Church would refuse Christian burial for anyone who had died by suicide. Everyone thought that every suicide was a conscious act of extreme contempt against God and against the self.

The Church continues to teach that suicide is a mortal sin. The Catechism of the Catholic Church’s section on suicide says that suicide goes against love of self, love of neighbor, and love of God. However, it now also teaches that in situations of extreme psychological or physical “disturbances” or “suffering,” a person’s culpability is reduced. Culpability depends on conscience, which can only be heard if a person is “sufficiently present to himself.” Speaking from as much experience as I could have, people are not usually present to themselves when they are considering suicide.

As a college student, I don’t sleep very much. Sleep became an annoying necessity that was sacrificed in the name of productivity. I realized that I could not only function but think on very few hours of sleep, so that is what I did. For the first year or so the only effects I had were dizziness, which I learned to hide. But after months of running on as little sleep as I could, the chemicals in my brain became imbalanced.

I began to feel anxious, overburdened by a life that seemed impossible, threatened by a world that seemed to want me, personally, to fail. Part of me honestly saw everything as a dark personal attack by the world itself. But part of me also knew that it was my brain that was making me think that; that it was my brain that was giving me those thoughts and emotions. And knowing that my brain, the part of us we rely on most, was turning against me, was worse.

To save myself from my perceived threats, I thought of escaping the world by escaping my body through death. Not to evade responsibility or duty, but to survive. I saw my body as something that would destroy me by keeping me in the world that was closing in on me. If I escaped my body, I would be free. I would be safe.

In suicidal moments, there is a strong removal of self from body. The body, other people, and the physical world seem strange, almost as if you had been watching it out of focus and it had suddenly become sharp, but with the colors darkened and the shadows lengthened. The self takes on a very strong identity that is completely independent of all things physical. The body becomes disassociated from the self, and thus unimportant and irrelevant.

Part of the natural aversion to suicide is the pain that will inevitably come with it. But when you are in the moment, you don’t care. Pain ceases to become a factor. It’s not simply that you refuse to let it bother you—there is no emotional connection to the thought of pain at all. There is no emotional connection to anything. Because you have already become separated from your body. All logic ceases. All Catechetical training, all natural instincts to survive, are gone. They need a brain to sustain them, and the brain is exactly what has turned against you.

Thankfully, in my first and hardest moment I had a brief realization that I had to live, and nothing bad happened. I told a friend about it, and a few months later when I had recovered he told me that the chance of suicides going to hell was greater than I had thought. At first I was terrified by that knowledge, but later, when I was facing all the same feelings again, that knowledge is what saved me. As much as I wanted to escape earth, the chance of never escaping hell wasn’t worth it.

My college, Benedictine College, has a lot of excellent resources for students struggling with depression. Those of my friends who knew about my depression encouraged me to go to one of our counselors, and the sessions helped me regain a more realistic, less dark view of the world. When I was “on the road to recovery,” we had a guest speaker whose story helped me remember that love, and Love, exist and are worth living for.

I also had a bit of an advantage in my self-recovery because I had studied depression in relation to neuroscience. In high school I took a course on neuroscience, and depression was discussed. I learned about clinical depression, its causes, and its effects. I knew what was going on in my brain, what chemicals were out of balance, and what areas were out of sync. I had also read autobiographies of people with depression and suicidal tendencies, both out of curiosity and to educate myself in case I ever met someone who had it. I never thought I would end up using my knowledge on myself.

But if I had not had that understanding of depression’s scientific aspects, I would not have understood what was wrong with me, I would have felt much more frightened and lost, and my recovery would have been much longer and harder.

Suicide is now the third leading cause of death in people my age.  Given that one out of seven people in the world are Catholic, it makes sense that many people attempting suicide are Catholic. It may seem like a terrible idea to tell someone that if they commit suicide they could go to hell, in the right moment it could save their life. Suicide should be assumed to be a mortal sin so it can be a deterrent rather than an escape.

But if someone does commit suicide, especially a Catholic, do not assume they are in hell. Only God can know what was in their heart at the time. There is still a chance they are in heaven, or at least in purgatory. And if they are, your assumption of their condemnation would mean missing the opportunity to pray for them, to release them from purgatory sooner, and to give them the happiness they were searching for.