Sunday: The Advent of God the Storyteller 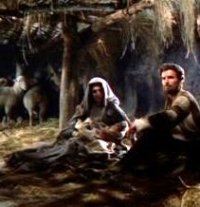 The Advent and Christmas seasons teach us that God loves a great story. That’s good to keep in mind on the Fourth Sunday of Advent (Year B), when the long wait for Christmas starts to feel a little too long.

Consider the dramatic aspects of salvation history: There is an “inciting incident” with the snake in the garden. There is rising action and complications accompanied by great special effects, with the flood and the burning bush and the Exodus. As figures like Joseph, Moses, David and Solomon rise and fall, we see romance, betrayal and plot twists building to astonishing climaxes and an ultimate resolution.

God made man, and men love a good story. So it should not be surprising that God, too, is dramatic. You could call those Old Testament times the work of a master dramatist. But in Advent in Christmas God is not just the writer; he is the star of the show. When God himself enters humanity, you see new dramatic principles. Here are a few.

When a new movie is coming, companies go out of their way to create the expectations that will make you long to see it, from teaser trailers months ahead of time to greater and greater revelations.

In our Advent readings, we see how God made us long for him. In Dec. 21’s first reading, we get the advance notice in David’s time. In previous week’s Gospels, we have met John the Baptist raising interest. In today’s Gospel, we meet Mary herself and we know the main event is nearly here.

Maria running down the mountain in The Sound of Music, Gandalf the Wizard’s fireworks wagon in The Lord of the Rings, Simba lifted aloft in Lion King: We love to see great characters introduced by dramatic entrances.

God is the king of dramatic entrances. We see it in today’s readings and the readings for Christmas. Angels prepare Jesus’ way at conception and birth. He doesn’t just arrive on the scene: He has a chorus of angels singing peace on earth and a spotlight provided by a star.

Play to the back row.

From Greek drama to Shakespeare to movies, stories have lots of nuance for the thinkers in the crowd — and lots of emotion and action for those in the “cheap seats.”

God’s stories are the same way. Read the Gospels, and you will find great nuance and subtlety — enough to keep theologians busy for two millennia. But you will also find stories told with bold, stark characters and clear, telling actions. The Church has always been able to speak to the illiterate as well as the literate, simply by depicting these stories on the walls, ceilings and courtyards of churches.

Christmas plays to the back row so effectively that it still captures our culture’s imagination, long after our society has ceased being culturally Christian. It has a troubled husband with his pregnant wife. It has rough men of the fields encountered by angels. It has mysterious Eastern travelers. It has an evil, violent king. It even has crowd-pleasing animals.

In theater, you don’t want to overstay your welcome with an audience. You don’t want the audience to be looking at their watches, thinking “This has been great, but when will it end?”

Then, the drama of our own lives will probably end leaving us wanting more: more time to repent, more time to get it right. Advent is given to us so that we have plenty of warning to make ours a good story with a happy ending. God the dramatist likes happy endings, too.