The Two Most Effective Habits for Catholic College Students 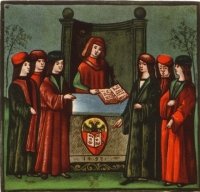 For the past two decades plus, I have taught either high schools seniors or college freshmen at Catholic schools. I think it comes down to two habits. Cultivate them, and you are very likely to succeed. Abandon them, and you will most likely flounder.

Is confession the most important sacrament? After the gateway of Baptism, most theologians speak of the Eucharist as the “Sacrament most holy.” Is confession more important than prayer? Most spiritual writers speak of prayer as an essential habit. Why then, do I insist on confession?

Because I don’t know anyone who has the habit of frequent confession who blows off his prayer life, or who lacks Eucharistic devotion. It’s a habit that is easily measured (every two weeks seems a good suggested frequency; your soul certainly needs cleaning at least as often as your room) and I can honestly tell you that, when confession begins to falter, other things like prayer or Eucharistic life tend to slack off as well.  It makes sense. When we stop taking our meds, our disease progresses. We are all terminally ill with sin. We need God’s healing grace to stay on track toward heaven.

The habit of confession also presupposes examining one’s conscience before God, reflecting on behavior in light of God’s will. It is extremely important to remind ourselves that God has a plan for us, and that His love for us makes demands on us. The habit of saying no to ourselves for love (of God and of others) is also great preparation for marriage, which is why I recommend it as a habit to look for in a spouse. Pope Francis recently spoke of confession as essential to “remain in love.”

2.  But one does not shell out thousands at a Catholic college merely to grow in one’s faith. We can and should grow in our faith at every stage in our lives.  The college years are years society gives young people, free from the pressing need of earning a living and contributing to the common good, in order to become educated.  Their primary task as students is study, not a thriving social life or even mission work.  If the student does not take advantage of his education, he fails as a student.

So how do you know whether your study is a priority? One question: how much do you study when the sun is out?  The college years will hold their share of all-nighters and cramming, for sure, but all-nighters as a lifestyle choice points to time-management issues. A college schedule is more spread out than a high school schedule. There are often large blocks of time during the day in between classes. It is not hard to find 3 hours of daylight study, outside of class time. If your first class is 10am, don’t wake up at 9:45. And leave your X-Box at home. You won’t transform the world by getting the high score at the latest gaming fad.

Studying during the daylight hours will lead to a more balanced social life, because business has come before pleasure. It will also lead to better habits for the future workplace, since it requires a solid work ethic and the ability to plan ahead. Last Minute Lucy is nobody’s ideal job candidate. (This is intended for those who are not working to put themselves through school. If you are, you probably study at night, but don’t need a lecture on work ethic.)

Whether a student is a braniac or one who struggles (and especially if one struggles,) the habit of using daylight hours for study will ensure that he reviews the subject matter when the brain is most alert, and when those who can help him are available. When I receive an e-mail marked 3am from a student, it does not make a positive impression.

Study at a Catholic university is a constant striving for the true, the good and the beautiful in every discipline. And the word discipline is key. It comes from the Latin for “learning.” A learner is a disciple.  Catholic universities should form capable, engaged, effective disciples. Are you on track? If you commit to confession every 2 weeks and 3 hours of daylight study, you will have two objective bellwethers to keep you on course.