Why Are We Here? 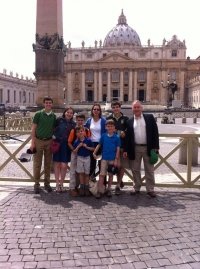 Yesterday I walked (= was on a human conveyor belt) through the Vatican Museums with a 7 year old. And a 17 year old. And 16, 14, 12 and 9. And my saintly wife who next week will again be 29. It would have been OK if not for the 100,000 others who wanted nothing other than to rush as fast as possible to the Sistine Chapel, only to be shushed by the guards and pushed by the crowd toward the exit.  Fellow classicists and art lovers, I have seen our purgatory, and it’s awful. Tantalus had it better, because his torment didn’t include getting elbowed in the ribs by (my conjecture) a former captain of an eastern European women’s roller derby squad, nor was he hit up for 120 Euros for the privilege.  As Raphael’s “The School of Athens” receded from view, my mind was haunted by the question: “Why are we here?”

My wife has a strong connection to her cousins in Italy. My father-in-law used to spend his summers in the hills above Benevento, in the small town he grew up in, and we want our children to continue that bond. That’s the main reason we are here. And it has been a festival of cheek-pinching, amazing-meal-cooking (why can’t anyone our side of the Atlantic make an eggplant taste this good?), fawning-over-the-kids explosive affection.

For my part, since I studied 5 years in Rome, I wanted the kids to experience Rome like I did. That part has been less successful. Rome has changed and so have I. A care-free student has little in common with a father of six, worried at every moment about pickpockets and playful children stumbling into the maelstrom of Roman traffic. Let’s not even mention the prices and the exchange rate.

But, albeit for a fleeting moment, we saw Pope Francis. At the Wednesday Audience he spoke of his own whirlwind trip to the Holy Land. He spoke of  the reasons for his visit, about why he was there. And, even though I was translating on the fly, and fielding questions about how much longer we would have to stand in the sun, I gathered that the main reason he was there was to build relationships. There will be no unity among peoples without unity among people. He has invited the presidents of Israel and of the Palestinian authority to come to Rome to pray together. That’s it, pray together. And that’s everything. That’s the best way to begin a friendship, to wish for the same thing, peace, together.

While I am in Italy, I have tried to dust off my Italian after nearly 20 years. I am reading Italy’s most famous novel  (and Pope Francis’ favorite book,) Alessandro Manzoni’s I Promessi Sposi (The Betrothed.) It is an absolute delight. In Spanish controlled Lombardy in the 1620’s, the evil desire of the powerful Don Rodrigo forces Renzo and Lucia to postpone their wedding and to flee separately.  It is a story of oppression and of the gentle and inscrutable ways of Providence.  The first night of their flight, a boatman rows them across Lake Como as Lucia silently weeps. On the opposite shore, he refuses any payment and even chafes at being thanked, saying, “Di che cosa?… siam quaggiù per aiutarci l’uno con l’altro.” (“What for? …we’re down here to help each other out.”)

The grace of Christ, and only that grace, gives us the power to escape the centripetal force of selfishness and be a person who helps out others, seeking nothing in return. That is what Pope Francis tells us, constantly. It is what he exemplifies. It is what I have seen in friends who allow eight Mulhollands to invade their two bedroom apartment, happy to invite us for lunch, in my wife’s cousin Elisa who bought ketchup (taboo in an Italian kitchen) for the first time in her life because the Americans were coming.

The boundaries of nations have changed and will change again. The fundamental human divide has and will always be that between those who believe they are here for themselves and those who know they are here for others, and who live in and through the power of God for the good of everyone they meet.

What got me through the Vatican Museums was the image of a man carrying an old man in Raphael’s “The Fire in the Borgo.” I was trying to tell my kids it was an image harkening back to Aeneas carrying his father Anchises out of Troy in flames. I got pushed out of the room before I could finish.  My kids were just happy to be there and finally to be able to sit down in a park when it was all over. If it was just for me, I could bewail my paternal failure since my kids prefer swings to Renaissance masters. But it’s not about me. It’s about the ones I’m carrying.

I’m finding it more peaceful to be a father like Pope Francis, where service is the only item on the agenda. Pray for the rest of this Italian sojourn.  I’m sure it will go well, since I no longer have any agenda (well, beyond reading Manzoni while digesting Elisa’s culinarily incarnated charity.)  I’m only here to help. That’s why we’re all down here, after all.