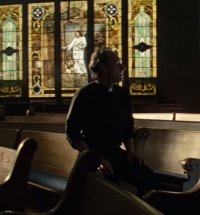 When I saw that the 2015 Netflix series “Marvel’s Daredevil,” which debuted April 10, featuring a sympathetic portrayal of a priest, I had a brainflash – I thought that maybe I could put together a list of 10 positive priests in movies in the New Millennium.

I soon had a list of 20 positive priest portrayals since 2000, and noticed 15 of them were from the past 10 years.

There was the bright young priest whose advice hit home with Clint Eastwood’s grizzled cynic in Gran Torino (2008), the cautious but faithful priest played by George Lopez (of all people) in Henry Poole Is Here (2008). There were the good natured priests in sports B movies The Perfect Game and Mighty Macs (both 2009).

Then I noticed that fully 12 “pro-priest” movies were made in the past four years.

It made me wonder.

The movie Spotlight starring Michael Keaton is coming out this year, celebrating the Boston Globe reporters who covered the priest scandal that started the media frenzy in 2002. That is the kind of priest movie one expects in our Catholicism-averse, post-abuse scandal world.

But why all the positive priest movies? I put them in categories to try to understand.

Catholics know it is not the priest’s strength that is admirable, but his faith. He knows his true home is not here, but in another place. “[A]ccepted with a joyous heart,” says the Catechism, “celibacy radiantly proclaims the Reign of God.”

Kenneth Moore and Alec Guinness were superior Father Browns, but the bright and lively new series is an improvement over the dated older versions.

Perhaps it takes a Catholic to properly admire priests. Two “Catholic projects” admiringly depict their priests as otherworldly heroes: For Greater Glory (2012) with its kindly martyr priest and There Be Dragons (2011) with its enigmatic appearances of St. Josemaria Escriva.

But even in Man of Steel (2013), the literally super-natural hero Superman turns to a priest at Sacred Heart Church for advice on his duties in earth.

We know we need priests to fight the devil … and sin.

The Rite (2011) got a bad rap; it was better than the panning many critics gave it. Besides, its central story is the story of modern man: A priest rediscovers his faith by facing a devil that he at first only reluctantly believes in.

This is the experience of man in the age of the holocaust, the gulags, the drug cartels and terrorism: We think evil is a thing of a past, more primitive age, until we can’t avoid it.

Exorcist movies are scarier than monster movies because we are more afraid of true things.

The Conjuring (2013) is an old-fashioned exorcism movie with a strange twist: Lay people as well as priests fight the devil. Deliver Us From Evil (2014) is a contemporary-styled exorcism movie that delivers a strong priest character, even if he doesn’t wear his collar.

Sin is a mirror image of Satan in movies as in life. Men and women are haunted by sin and can’t get rid of it on their own.

Movies from the sublime — Les Miserables (2013) — to the straight-forward — October Baby (2011) — see the same problem. The first features a priest as a main character saving Jean Valjean from misery at the beginning and end of life; the second gives a priest the key lines about forgiveness and personal sin.

We admire priests who struggle like we do and overcome.

Several of the priest movies of the past four years tell the kind of vocational crisis stories we have seen before in such movies as Keys of the Kingdom (1944) and The Mission (1986).

One of the central threads in To the Wonder (2012) is a priest’s (Javier Bardem) faith struggle. The film has all the hallmarks of a Terrence Malick movie, with beautiful cinematography, a slow pace and impressionistic spiritual themes. In the end the priest sees “Christ with me. Christ before me. Christ behind me …” in an unexpected way.

Calvary (2014) is a hard film to watch, which nonetheless rewards the viewer with the picture of a man who has transformed his personality for the sake of others. The Confession (2011) is more fun to watch, but with less payoff as Kiefer Sutherland and John Hurt face off in serial-style cliffhangers. But both films show how a horrifying sin of the past works away at a soul such that only a total identification with God can overpower it.

The stories a culture tells show what is in our hearts. Clearly, somewhere deep inside, we know that God is reaching out to us through the representatives he has placed in our midst — through the priesthood.

Church is on the rise , signs of hope