A Campus Where Faith and Reason Meet 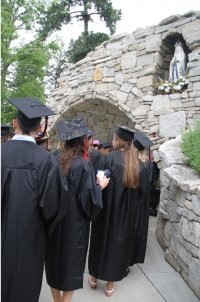 By Archbishop Joseph Naumann  | Naumann is the Archbishop for the diocese of Kansas City, Kan. This is his homily for Benedictine College’s Baccalaureate Mass, May 15, 2015.

The renewal and growth of Benedictine College in recent years has corresponded to its re-emphasis of its Catholic identity and character. In part, this involved a rejection of the Nihilism that has dominated so much of American culture, and particularly academia, in the past 50 years.

However, Benedictine College’s success is not so much about what it has rejected, but what it has embraced. Benedictine College has created a culture where the pursuit of truth is celebrated no matter if it is in laboratory unlocking the beauty of the natural world or in the chapel kneeling before the Blessed Sacrament; no matter if it is being inspired by insights gained by reading great literature or by pondering the Word of God; no matter if truth is discovered through the light of reason or the illumination of faith. Benedictine College has committed itself to be faithful to the vision that gave birth to the universities centuries ago, and remains the authentic foundation of Catholic higher education today, namely to be a place where faith and reason intersect, and where these two avenues to truth are equally honored and explored.

It is ironic that most who lead secular universities today, and sadly even some in Catholic higher education, seem to be ignorant of the origin of the university in Western Civilization. Dr. Thomas E. Woods, who earned his undergraduate degree from Harvard, in his book — How the Catholic Church Built Western Civilization — observes, “The University was an utterly new phenomenon in European history. Nothing like it had existed in ancient Greece or Rome. The institution that we recognize today, with its faculties, courses of study, examinations and degrees, as well as the distinction between undergraduate and graduate study, comes to us directly from the medieval world. The Church developed the university system, because, according to historian Lowrie Daly, it was `the only institution in Europe that showed consistent interest in the preservation and the cultivation of knowledge.’” (Page 47)

Benedictine College has committed itself to be an institution where faith and reason intersect — where each respects the other’s competency as an avenue to the one and the same truth. For this I am extremely proud and grateful to its President, Board, and sponsoring communities.

President Minnis, I remember well the ceremony in this abbey church that marked your formal inauguration as the new President of Benedictine College. During the ceremony, there were a series of speakers who acknowledged many of the reasons why the Board had made such a wise choice in your selection. However, the speech that I remember most vividly was given by a member of the faculty.

This brave faculty member duly acknowledged the truth of the accolades of all the previous speakers. Then he paused and said he thought Napoleon’s question, when presented with a recommendation for the appointment of a new general, was apt for the occasion. Having listened to all the wonderful talents and abilities of the proposed candidate, Napoleon asked simply, “But is he lucky? Do good things happen when he is on the battlefield?”

The faculty speaker concluded, in addition to all of your other qualities that indeed you were lucky. After all, somehow you were lucky enough to convince Amy to marry you. In the first months of your presidency, you received a million dollar bequest. Perhaps, most unexpected of all, within the first year a Benedictine College alumnus was awarded the Nobel Peace Prize. As we look at all that has been achieved in the past 10 years, it seems your luck has continued.

I was reminded of this, while reading a draft of book on parenting written by a mother of seven. In part she was prompted to attempt to write this book because so many people commented to her over the years, “You are really lucky to have such good children!” While humbly acknowledging that she and her family have been richly blessed by God, in the book she explains that it is not all just good fortune. Good children are not simply the result of a roll of the dice. Parents can make some choices that will improve greatly the odds of raising strong, healthy, virtuous children. 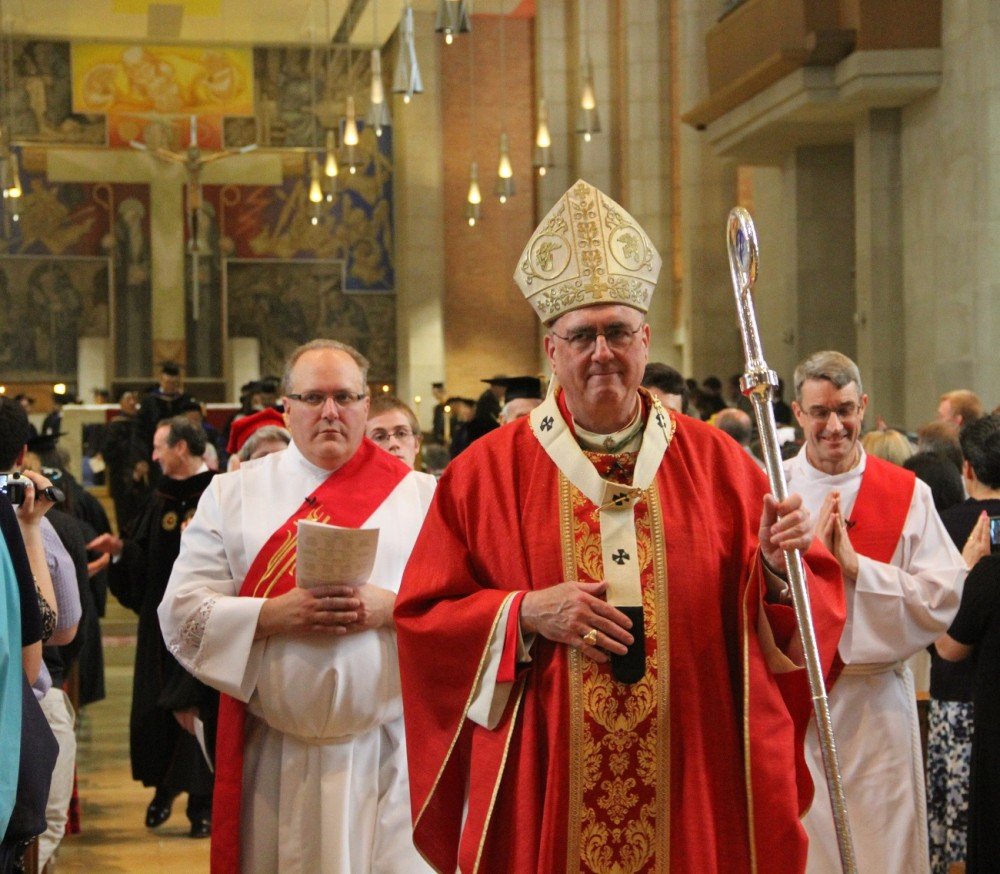 Yesterday in the Church’s liturgical calendar we celebrated the Feast of St. Matthias. Matthias, as you may recall, was the one chosen to take the place of Judas. In a sense, he was the first bishop elected by the Church.

The process of his election was quite different from what happens today. Peter asked the community of believers to recommend possible candidates who had accompanied Jesus throughout his public ministry — from the time of the Lord’s Baptism in the Jordan, until his passion, death, and resurrection. Two candidates were proposed. According to the Acts of the Apostles, one of the candidates was Joseph who was called Barsabbas, and who was also known as Justus. It seems like this first candidate had many aliases. The other candidate was Matthias.

To determine which one would become the 12th apostle, they did not ask Matthias and Barsabbas to submit resumes. They did not have them campaign or give speeches about their credentials. There was no negative advertising campaign to discredit the other candidate. There was no election. They left the choice to the Holy Spirit. They drew lots, and the lot fell to Matthias.

In the Church, there is a patron saint for everything. Matthias could be the patron for the lottery.

Winning the Lottery of Life and Increasing the Odds

My dear graduates, you have already won the lottery of life in so many ways. Each one of you has been so blessed by God. You have been blessed to be born in this time, to live in this country with so many resources and opportunities, to have the support and love of such good families, and to have come to this special place, Benedictine College, to earn your degree.

More than anything else, I trust you feel this afternoon a tremendous sense of gratitude. While praying in this abbey church perhaps for the last time, I trust your hearts are overflowing with gratitude.

My dear graduates, as you go forward from Benedictine, it would be wise not to depend on luck and good fortune to be your strategy for your future success. While it is true that there are many things that happen to us — good and bad — that are beyond our control, still we can hedge our bets. Living happy and fruitful lives is not the result of good fortune.

One of the ways in which you can improve your odds for future success is to never stop pursuing truth. Be a life-long learner. Never be satisfied with what you already know. Be passionate about seeking to grow in knowledge and wisdom.

Many of you have developed some great disciplines during your college years. You have learned to work hard, to not be defeated by life’s obstacles, to persevere, and to not give up. Work hard, striving not just to become smarter, but, more importantly, to become wiser.

The most important thing you can do to hedge your bets for a joyful life is to make Jesus Lord of your life. The most beautiful aspect of our Catholic faith, in my mind, is the truth that God loves each one of us personally and uniquely.

God does not just love us as a group, as a big collective mass. We are not just lost in the crowd of eight billion of Earth’s inhabitants. In the Gospel, Jesus describes himself as the Good Shepherd, who knows each sheep by name and who is willing to give his life to rescue the one lost sheep.

Jesus desires to have a personal friendship with each one of us. He knows us better than our parents, our classmates, our fiancées, and our spouses. Only the love of Jesus can complete us and satisfy the deepest longings of our hearts.

If you want to be joyful and happy, no matter the external circumstances of your lives, then be men and women of prayer. Share with the Lord each day, from your heart, whatever is going on in your lives. Just as importantly, learn to listen to God — to be able to recognize the Shepherd’s voice. Attune the ears of your heart to be able to hear God speak to you through the scriptures, through the events of your day, through the sacraments of the Church, and especially through the Eucharist.

Give Jesus Lordship! Make your relationship with Him your first priority, and every other aspect of your life will be better.

Several years ago, a successful businessman related to me that the pastor of his parish had said to him many years ago, “Many Catholic colleges make great alums, but Benedictine College makes great parishioners!” This is probably the highest praise a pastor could give a college.

Dear graduates, always treasure your experiences here at BC. Never forget what you have learned here, not just in the classroom, but, more importantly, in the chapel. God’s desire for you is to have the complete joy that He alone can give, no matter the exterior circumstances of our lives, whether rich or poor, healthy or sick, praised or despised by the world. Jesus desires for you to have abundant life in this world, and eternal life with Him forever.

Like President Minnis, place yourself under Mary’s mantle. Allow our Blessed Mother to draw you close to Jesus, and the world will think you are very lucky!