A New Chaplain for the New Year 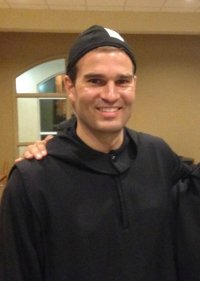 Benedictine College freshmen weren’t the only ones who donned beanies for the first time on Tuesday night to show they are new Ravens–so did the college’s new chaplain, Fr. Simon Baker. The newly-ordained priest will take on the spiritual needs of the college’s record 1,850 students in the 2015-2016 school year with Fr. Jay Kythe, Benedictine’s associate chaplain. We asked him about his vocation and his approach to leadership.

Tell me a bit about how you became a priest.

It starts with good parents. I was raised in the faith, so I’ve always been Catholic. My parents wanted me to really be raised in the faith. I went to Catholic schools because they considered that the best option. So I was well-informed, but it took a while for me to be formed. It wasn’t until college, when I had some independence, and I was doing other things, like sports, and I had the opportunity to not practice the faith, that I had to ask myself whether it was important, and whether it was important enough for me to practice it. I started asking that question of myself and seeking the answers in other people, especially my mom and my brother. My mom gave me a great book, which was a spiritual and intellectual resource for me. And that was huge coming from a parent. My brother was a monk at the Abbey at the time. Man, he had all the answers. I’d visit him, and I really found peace in prayer. I realized that the Eucharist is everything we say it is, and so I decided, that’s it. I have to do everything for the Eucharist.

Was it difficult to discern your vocation?

I wanted to be a priest for the Eucharist. Honestly, choosing where to go was harder than choosing between priesthood and marriage. Once I decided I wanted to be a priest, it was like the whole world opened up to me, and I had to pick somewhere! There are Benedictines, Franciscans, Trappists, Jesuits, Dominicans, all of these. My brother Luke said that if God wants you to be somewhere—and he does—he’ll get you there. And my connections were to the Abbey, so that’s where I went.

What’s your favorite part about being at the Abbey?

The prayer, the community too, that brotherhood that we have—but, the prayer. I believe prayer has to be central.

Is there anything people should know about life in the Abbey? Any preconceptions people have that are wrong?

You said you wanted to become a priest

for the Eucharist. Is that what you love most about being a priest?

The Eucharist, yes, but also confessions. That really does it for me. It’s so humbling, to see these people who are so sincere, and so humble about themselves, because they see themselves so honestly and as they really are. They aren’t coming to me because I’m me, but because of the sacrament, and I just get a front-row seat.

Before you decided you wanted to be a priest, what were you in college for?

Math, physics, education, soccer, and girls. Math and physics were my undergraduates, and education was my Master’s. I went to Rockhurst University in Kansas City so I could play soccer, and as a guy I was all about girls too.

You’ve been ordained for four whole months, and now you’re the chaplain to 2,000 students and six junior monks at the Abbey. What did you think when you heard that?

I was pumped! I heard about it two years ago actually, when I found out that was the track the Abbot wanted me on. So the electives I took in seminary were kind of aimed at that. I was leery at first, but it’s a good fit. I think I can bring a lot, and I’m going to learn a lot from everyone too.

The students. The student body. I’m impressed with the caliber of character that they bring with them. Benedictine, viewed as a secular college, has everything—sports, community, all of it. Not that you can separate the school like that. If you’re looking at it just as a college, it’s great. But it doesn’t just have that. It’s a Catholic school, a Benedictine school, and that changes everything. There are some students who may just come for the typical college stuff, but there are so many students who come here because they want that Catholic part, and they want the Benedictine part. They are all great students even though the spectrum of interests and purposes for enrolling is wide. This dynamic is what makes BC a unique and exciting ministry.

Is there anything you miss about secular life?

Fast food. And the ability to contact friends as easily. But on the other hand, it means that when I do talk with my friends, it’s a more meaningful interaction. It’s like Facebook and being face-to-face. With Facebook, you can be in constant contact and you can just talk to anyone, but when you sit down and you’re face-to-face, it’s a lot more meaningful.

What’s your passion? What gets you excited just thinking about it?

Formation. And helping people. I do like sports, and being outside, and nature, and doing things with my hands, but I think the underlying reason is that they’re formative. I love the dynamic relation between morality and spirituality, and finding that in formation.

My brother, Luke. He’s selfless. He’s given to all kinds of people in all kinds of ways, and it’s hard for me to emulate. I love that. He sacrifices for his family. He doesn’t do the things he wants to do, so he can do the things he knows he has to do. He’s the one that gave me the spark to be where I am today. I was in college, and 2 a.m. is no problem. But he was a monk, and when you’re a monk you have to get up for morning prayer. But he’d be up with me at 1:30 or 2:00 answering my questions. I asked all the questions like “What’s the meaning of life?” He never said, “Let’s talk about this in the morning.” He knew that if we talked later, it wouldn’t be the same as when I really wanted to know the answers. That’s heroic!