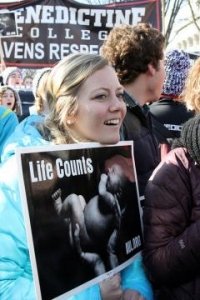 Students from Benedictine College are back in classes today after joining hundreds of thousands of pro-life protesters in the college’s annual trip to March for Life in Washington, D.C. 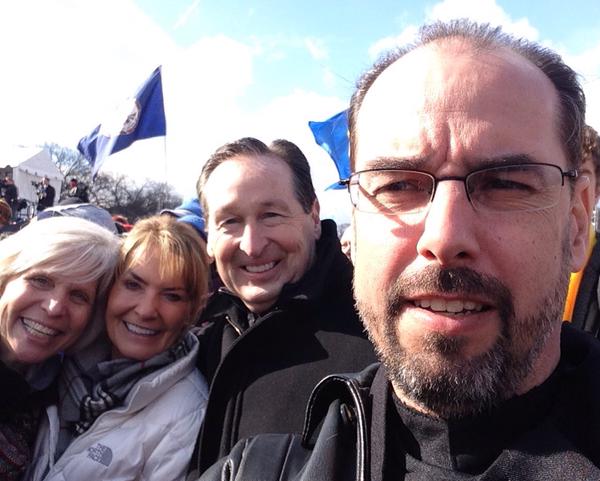 Each year Benedictine College sends the largest group the greatest distance for the annual March, and this is the 30th year students have made the trip. This year, President Stephen D. Minnis and his wife Amy, Vice President of Student life Linda Henry, Abbot James Albers, Chaplain Father Brendan Rolling, professor Stephen Mirarchi and others joined students on the march.

Rachel Lanz, a Benedictine College senior from Lakewood, Colo., also found the trip to be an invigorating experience.

“Going to the March is my way of saying ‘I believe in the value of life,’” she said. “Seeing thousands of people unite creates a hopeful fight, a joyful fight. It was the strangers by my side that inspired me. I knew nothing about them except for one thing,that we both dropped everything to march for the freedom of life.”

Meghan Connelly, a Freshman from Kansas City, Mo., was one of the students who went.

She said she was inspired by being in Washington, D.C., on the anniversary of the Roe v. Wade Supreme Court decision. “It was comforting to see that the people of my generation stand up for the unborn,” she said. “It reassured the fact that we are the pro-life generation.”

Dr. Linda Henry, vice president of student life, traveled with students as she does ever year.

“I love going on the March for Life trip each year with so many fellow Ravens to witness to the culture of life,” she said. “I truly believe every life is a gift and it’s inspiring to be among students who are playing a part in building a culture of life. The pro-life generation is definitely alive and strong!”

The Cardinal Newman Society described the Benedictine group this way:

“Six buses will depart from Benedictine College in Atchison, Kan., for a 2,262-mile, 54-hour, roundtrip journey. … Additionally, Benedictine College was chosen by the World Apostolate of Fatima to carry the statue of the Triumph of the Immaculate Heart of Mary during the March. The statue has traveled across the country over the past year. The College led the March last year.” 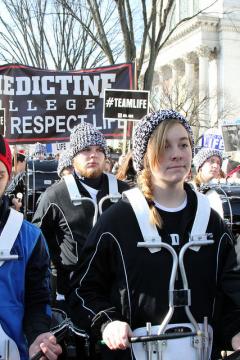 The Campus Reform publication of the Leadership Institute in Arlington, Va., reported on the trip and shared another detail: “Benedictine College band members played music and chanted the phrases ‘Life’ and ‘Hey, hey, ho, ho, Roe v. Wade has got to go!’”

Even before students departed, the March for Life experience at Benedictine College was unique. Students who took turns sleeping outside in a tent to raise awareness and increase participation in the March trip were featured in the student newspaper.

On Jan. 19, Gov. Sam Brownback visited campus to speak at the Leadership Vision and Values Class led by President Minnis and Dean of Students Joseph Wurtz. He posed for a picture with students going on the March for Life and told them, “I believe the right to life is one of the central issues of our era.”

Dr. Stephen Mirarchi of Benedictine College’s English Department rode the bus with students. “What impressed me about the trip?”he said, “That hundreds of thousands of young people from around the nation, while taking the purpose of their trip seriously, exhibited true joy, a kind of holy patriotism for that nation of unborn souls so often forgotten and even in some quarters vilified today.”

In addition to attending the March, Benedictine College staff and the Ravens Respect Life group attended Mass at St. Peter’s Church in Washington, prayed the Rosary in front of the Supreme Court building, and a gathered with other groups from the Archdiocese of Kansas City in Kansas.

The trip to the March first started with Benedictine students who were interacting with the Kansans for Life organization. Early Benedictine March for Life pioneers have gone on to greatness: Both Abbot James Albers, OSB, in Atchison, and Bishop Andrew Cozzens in St. Paul-Minneapolis, were early marchers.