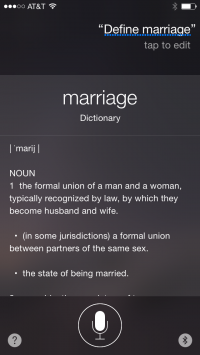 After the U.S. Supreme Court followed in the footsteps of Canada, France and Ireland and redefined marriage, what will happen to our culture?

Some say: Relax, Catholics have seen others reject their definition of marriage before. We have learned to live with the divorced and remarried — why should gay marriage be different?

Others say: Are you kidding me? It isn’t “Catholic marriage” that we have lost, it’s marriage, period. Marriage has always existed as a way to protect the life-giving relationships that build the future of the nation. Now that is gone.

I’m not sure who is right. I see at least four ways this could go.

The first scenario: The dominant culture will destroy all dissenters.

In the book American Nations, journalist Colin Woodard notices something others have noticed before him: America isn’t one culture so much as it is a collection of specific separate cultures. He counts 11 “nations” that make up America.

He points to sociological studies showing that a culture is established by a region’s dominant first permanent settlers. Later immigrants don’t change the culture; they assimilate to it.

His “Yankee Nation” seems to dominate in America: It is the nation settled by Puritans who wanted to create a utopia. They were not tolerant; they were religious extremists. They outlawed other religions and hunted witches. They set up camp in the Northeast and, later, the Northwest. While the Catholics in Canada’s “New France” intermarried with the Indians to the north; Yankee Nation killed their Indians or drove them from the land.

Now, hundreds of years later we see the dominance of the descendants of Puritans. They still separate body and spirit, only now it means they do what they want with bodies – up to and including abortion, promiscuity and homosexual marriage.

If we face Puritan Triumphalism in the future, the Yankee Nation will stay true to its cultural tendencies and attempt to destroy enemy cultures – us – to create a pure society that shares their superior ideals. It is already happening. The religious freedom of dissenters may fall next.

Another possibility was suggested by my colleague, Andrew Salzmann, and others: Maybe gay marriage isn’t a step toward gay dominance, but is a move by the WASP culture to dominate gay culture.

The White Anglo-Saxon Protestant culture that has predominated in America has a certain style of doing things. WASP propriety says your family should be small, you should be happy to work for the man, and you should keep any wild ideas to yourself so that you don’t disturb your neighbors.

When WASP society encounters a new culture, it turns up its nose and hopes it goes away. If it doesn’t, it co-opts it. This is what happened with the waves of Catholic immigrants. First, the Italian and Irish immigrants were shut out of American society. When there were too many of them for shunning to be practical, they were embraced — so long as they looked and acted like WASPS.

So that’s what Catholics did: We limited our family sizes to WASP proportions, and explored ways to make our religion more pleasing to their ears.

Some members of the loud, proud and out gay subculture fear that the same thing is happening to them: They are being asked to conform, to dress and act like good little WASPs, and some fear they are losing something.

A Third Possibility: A Latino Transformation

A third possibility is that gay marriage comes at the worst possible time for its backers. It comes at a time when white, WASP America is falling off a demographic cliff.

The influx of Latin American immigrants right now looks like strength for the dominant liberal ideology because it means votes for the Democratic Party.

But will it always? Pew polling shows that Latinos are more pro-life, but it also shows that the longer they stay in America, the more pro-abortion they become.

After the last November’s elections, Tony Castro asked “Are Democrats Facing a Latino Political Exodus?” The Washington Post published  “Hispanics on a GOP Senate: Sure, Why Not?”

A Latin Post article noted that “Latino Voters Still Prefer Democrat Congressional Candidates,” but saw slippage in the ranks. The liberal National Council of La Raza Action Fund worried about the situation and warned that the midterm lesson Democrats should learn is: “Don’t Take Latinos for Granted.”

Latinos know the importance of family. Perhaps their “nation” will dominate in the future, and will not blithely accept the destruction of the unborn – or of the institution that protects them.

In all the doom and gloom of the aftermath of the Supreme Court decision, Catholics need to be sure not to commit the sin of despair (loss of hope) by assuming we are beat.

Catholics embrace the definition of marriage that is tried and true and has endured for millennia. The Christian family caused a revolution in the West, empowering women (who were property before Christianity), rescuing the dignity of children (who were disposable in the ancient world), and building a culture where justice and love flourished as they did nowhere else. We should have faith in its power.

We Catholics have seen threats large and small come and go, from violence to slavery. They only last as long as we let ourselves fear them too much or toy with them because we fear them true little.

If we are true witnesses to Jesus Christ, the king of the universe, we can be confident: Secularism’s strength is vastly overrated, and the world is hungry for authentic Christian witness.