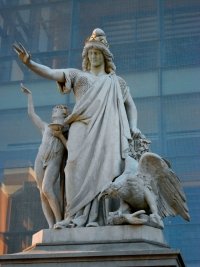 The reason for the Memorare Army’s existence has just come before the Supreme Court.

It all began with the HHS Mandate of the Obama Administration, a regulation forcing all nonprofit organizations — even religious ones — to violate their consciences by providing contraceptives and abortifacients to their employees.

“We cannot — we will not — comply with this unjust law,” Kansas City-Kansas Archbishop Joseph Naumann wrote at the time. “Our parents and grandparents did not come to these shores to help build America’s cities and towns, its infrastructure and institutions, its enterprise and culture, only to have their posterity stripped of their God-given rights.”

The Archbishop talked to Benedictine College president Stephen D. Minnis about the need for a national Memorare Army that would pray for religious liberty.

The Supreme Court is preparing to rule once and for all on whether to force religious-based non-profits to supply contraceptives and abortifacients to employees.

The circuit courts have been disagreeing on the law, finding different verdicts. To resolve the issue, the Obama Administration told the Supreme Court to rule and put all discussion to an end.

This case is coming out of the famous 2014 Hobby Lobby hearing. That case resulted in a 5-4 ruling in favor of for-profit corporations with religious values, finding that such business do not have to provide contraception-covering insurance to employees.

Religious-based non-profits are hoping for

The current law exempts religious institutions like houses of worship from offering this insurance to employees, without passing the responsibility off to someone else or having to file any paperwork.

There is a similar exemption for non-profits, but not as completely. Non-profits can file paperwork that “transfers their legal obligation to provide abortion-related drugs and services to the organization’s secular insurance carrier,” as Breitbart News said.

Obviously simply giving the obligation to someone else is not acceptable. Enabling the indirect supply of contraceptive insurance is just as bad as providing it directly, and that is why the non-profits are fighting for the same exemption that houses of worship are currently receiving.

The poster organization for the fight is the Little Sisters of the Poor, who have sued over the issue with the help of the Becket Fund for Religious Liberty. As Becket attorney Mark Rienzi said, “It is ridiculous for the federal government to claim, in this day and age, that it can’t figure out how to distribute contraceptives without involving nuns and their health plans.”

Thus the Memorare Army. Benedictine College’s President Stephen D. Minnis worked with Archbishop Naumann to launch a prayer campaign for religious liberty. Today, invite someone to pray with you for the protection of religious liberty in the upcoming Supreme Court case.