Benedictine College and the “Hunger for the Infinite” 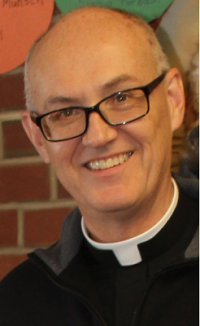 By Fr. Tim Hickey | Fr. Hickey is a 1981 graduate of Benedictine College and the former editor of the Knights of Columbus magazine, Columbia. He came back to Benedictine for the 2015 Convocation on September 1, where he celebrated the Opening School Mass. The following is his homily from the Convocation Mass.

I’d like to think that during those days between Our Lord’s Ascension and the sending of the Holy Spirit, those days when the Apostles and the Blessed Mother were locked away in the upper room for “fear of the Jews,” they spent the time together telling stories about Our Lord and their past three years together as his followers. That they reminisced, prayed about all that had happened to them, and through their prayer grew stronger in their confidence about what lay ahead for them, the new beginnings they would soon be made as they were sent out to be his Apostles.

In my preparations for this visit to Benedictine College for this convocation Mass of the Holy Spirit, I reflected a lot on beginnings, new starts and the Lord’s expectations for each of us, especially this year’s freshman class. And in my reflecting, I was reminded of a quote from T.S. Eliot, “In my end is my beginning.”

Among the novels I read in my final semester as an English major here at Benedictine 34 years ago was Kristin Lavransdatter, a 1,000-page saga about medieval Norway spread over three books. Its Norwegian author is the Catholic convert and Nobel laureate, Sigrid Undset. Her life spanned the latter part of the 19th and first half of the 20th century, and she spent some time here in the States during the Nazis’ occupation of Norway. Kristin Lavransdatter has a lot to recommend it. Plus, it’s the only novel I know that includes an appendix listing all of the holy days and feast days of the medieval Catholic Church.

A couple of weeks ago, in preparation for my trip here, I decided I would get ambitious and re-read Kristin Lavransdatter. Though I’ve read parts of it in the intervening 30-plus years, I’ve never tackled it again from cover to cover. So, I dug it out of a box of books stored in the rectory basement, cracked open the spine and then remembered that my homily for that coming Sunday still hadn’t been written; that the principal of our school had texted me earlier in the evening and I still hadn’t responded to him; that there were parish bills that needed paying with money we didn’t have… In short, my desire to get lost in the life of Kristin Lavransdatter as she grows up in a devout Catholic family, falls in love but then marries another man out of obligation to her noble birthright, raises her family faithfully, is eventually widowed as an old woman, and eventually enters the convent – all of that, plus beautifully written scenes of visits to chapels, of an outdoors eucharistic procession down a snowy lane – all that had to wait for another time since more demanding “pastoral” responsibilities awaited.

Besides 12th century Norway, we traveled to France during the Revolution in The Song at the Scaffold, Gertrude von le Fort’s retelling of the true story of 16 Carmelite nuns who were martyred for the faith during that time of so-called “liberté, égalité, et fraternité”; to Mexico during the persecution of the Church there in the 1920s in Graham Greene’s classic The Power and the Glory; to the US Gulf Coast during a hurricane to ride out the storm with Walker Percy’s Lancelot Andrewes Lamar, who bitterly derides what American culture had become (and this was only in the 1970s!), and again to the Deep South in post-World War II America to seek some kind of salvation without God in the company of Flannery O’Connor’s character Hazel Motes, whose self-professed religion is an “anti-religion.” Some themes in literature, it seems, never change.

As students, we were engaged in literature that embraced, explained and gave life to our faith by leading us down paths of truth, beauty and goodness. As Pope Emeritus Benedict has written, “God speaks through human words. Revelation is a dynamic process between God and man, which consistently becomes reality only in an encounter.” In retrospect, how reassuring and illuminating those encounters were, because when I landed at Marquette to work on my master’s degree, literature that scorned or questioned the faith, the Church and her teachings, literature peopled by characters without faith, without any sense of the transcendent, was what I was asked to read and study.

I arrived there just as deconstructionism and

other theories of critical study were making their inroads into academia. We didn’t talk anymore about books, or poems, or plays. We talked about “texts.” There weren’t stories or plots, there were “narratives.” There were no themes to be unpacked, pondered over or discussed; the text itself was the delivery vehicle and its message. No great truths were revealed; no meanings behind a story. I defer again to Pope Emeritus Benedict, who flatly contradicts these ideas. In fact, he says, “There is a surplus of meaning in an individual text, going beyond its immediate historical setting, and that is why there is always the possibility of taking it up in a new historical context and seeing a new significance.”

“Re-reading,” he says, is the invitation each text offers us, because we the reader bring to the poem or play or novel a new self each time we revisit it. This idea of re-reading goes hand-in-hand with our maturing in the spiritual life.  Any of us at one time or another in our life as Catholics may be challenged by habitual sins, by periods of darkness or questioning, but none of us should allow ourselves to remain in that darkness or doubt. That is one of the themes of our readings for this Mass of the Holy Spirit.

Servant of God Luigi Giussani, founder of the Communion and Liberation movement, quotes St. John Paul II in saying that our life is an unfolding of questions to which God is the only answer. You will find those questions being asked of you by your professors, and by you – and not just in your theology or philosophy classes, but in your science classes, in your nursing classes, on the ball fields, in your dorm room, in the library, the chapel, the Grotto or around the cafeteria table with friends.

The questions are being prompted by the Holy Spirit, and so we should pay attention. Most of us are not as privileged as the Apostles were in today’s readings. We won’t hear a mighty rush of wind signaling to us that the Holy Spirit is in our midst. But as Pope Francis said recently in one of his weekly audiences, “It is precisely the Holy Spirit that makes us understand Jesus well.” The Apostles gathered in the Upper Room with the Blessed Mother on that first Pentecost received the Holy Spirit and were changed men. No longer simply the Lord’s followers; they became his messengers. The 12 become the ones sent out into a world. That world confused the Apostles’ fervent entreaties about the kingdom of God with “drunken speech,” according to Acts.

Sadly, that still is the reaction of much of the culture to the Gospel and the new evangelization; it’s simply drunken speech all-too quickly dismissed or ignored or even, as we’ve seen in some of the Holy Father’s teachings, purposefully reinterpreted, all because we have the “new,” the “now,” and the “next” in front of our faces and at our fingertips all the time.

But, as Pope Francis has said, “All that we have in the world does not satisfy our hunger for the infinite.” And that is why, from time to time, it is good to steal away from one’s studies and head to a chapel, to read the Bible every day, to spend time in adoration before the Blessed Sacrament, or walk up to the Grotto and light a candle, and even read or re-read a 1,000-page Norwegian saga about a maiden who loves greatly in this world and dies loving the Lord most deeply from her deathbed in a convent.

Through the Church, through our baptism into the death and life of Christ, we have been called to live out the universal call to holiness, sounded by the Fathers of the Second Vatican Council. It is being voiced here on campus this year through the theme “Called to Greatness.” It’s an individual call, and it is a call for the entire campus and beyond.

In one Spirit, says St. Paul in our second reading, we are all baptized into one body though we are indeed many. Look around you. The manifold richness of our various callings, of your untapped greatness and holiness, of our untapped holiness, is Spirit-filled groaning, just waiting to be revealed and unleashed on this campus and in the wider world. As the school year unfolds, you will see some of your classmates and peers striving for greatness, for holiness; while you may see others choosing — like the Apostles — to keep behind the locked door of their self-defensiveness just a little bit longer.

But what would happen if together we all threw open the door and enlightened our needy world with our own Spirit-filled “drunken speech”? That is the challenge before us every day and you, especially, as you begin this new year at Benedictine.