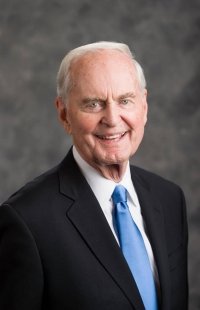 It has been said that the difference between a leader and a boss is that a leader serves, while a boss orders. Leaders are not aloof, do not keep themselves away from the work they have their employees do, and do not, in any respect, consider themselves to be better than those they lead.

According to this definition, Benedictine College and Kansas City recently lost a great leader when Byron Thompson passed away at home on August 4.

In 1969, Thompson was one of the first laymen named to the Board of Directors at St. Benedict’s College, as well as a member of the founding board of Benedictine College. In 1976 he was given the Cross of the Order of St. Benedict for his leadership and generosity, and 21 years later he was honored again as the keynote speaker for the 1997 commencement, where he was also awarded an Honorary Doctor of Humane Letters degree. In 2015, Thompson was chosen to receive the Kansas Monk Award from Benedictine Abbey at Benedictine College.

The best leaders are those who can inspire those after them to greater efforts. During his senior year at St. Benedict’s College, in 1955, Thompson was the editor-in-chief of the school newspaper, The Rambler. For his final editorial, Thompson chose to write on leadership, for those in the younger classes still in school. 60 years later, his words still apply:

“In choosing a topic for my farewell

editorial of the Rambler, I pondered long as to just what it should be. And the thought that repeatedly came to mind was: “Just what have these years at St. Benedict’s meant to me, as well as the other seventy graduating seniors that will cross St. Benedict’s stage for the final time this Wednesday, May 25? Have these years merely been a means, almost a necessary means today, for a better financial and social position in the world in which we live; have they given us but a firmer grip on the security that some of the specialized courses offer; have they been but a means to our becoming a more intelligent and more useful member of society as an altruistic spirit would dictate; have they merely offered an assurance of more easily finding our future companion through life in marriage?

“Though these be worthy objectives in themselves, if we have nothing more than the fulfillment of these and kindred aims in life we have “missed the boat” as the saying goes. If these were the only objectives of education here at St. Benedict’s college, I am sure the Benedictine Fathers would have never entered the educational field.

“What is this something more, – that plus value in our education which alone can justify the Catholic Church and the Benedictine Fathers in its expenditure of man-power and money to make this college and every segment of Catholic collegiate system possible? Fr. Francis O’Reilly, S.J., vice-president of St. Louis university, best summed it up in a credo which well could be St. Benedict’s: “We believe in the teaching of Jesus Christ, Who held that morality must regulate the personal, family, economic, political, and international life of men if civilization is to endure.” This statement of the most basic principles of Catholic education should not be like that catalytic agent which does not become an integral part of the final reaction, but rather that it is like yeast, permeating the entire mass of learning which we have acquired in the class-room and laboratories of this college.

“St. Benedict’s, a liberal arts college, has given us the opportunity to become the well-rounded men of which it professes, persons that must attain to more than one maturity. Not only have we had the opportunity to attain physical, intellectual, emotional, and social security – the aims of every educational institution from the primary grade to the university level, but moral and religious maturity as well, the latter two being the most important of all.

“A morally matured man has learned that the moral law of God is rooted in man’s very nature and that even if God had never promulgated the ten commandments, their content must be the universal dictate of man’s behavior, the same for all men of all times and in all places. A man who has not yet arrived at such an evaluation of the moral order, even if he is a college graduate, is not only ignorant, he is also dangerous.

“Equally important, as the crown of all education, must be religious maturity. Religious maturity simply means this: that a man has advanced in his intellectual appreciation of religious truth in direct proportion to his advance in the knowledge of history, science, literature, or whatever field of secular learning he may have pursued. A man who makes intellectual progress in any non-religious field, but who stultifies his intellect with regard to religious truths, naturally will forever remain a child religiously. Such a man runs the risk of giving up religion entirely, because his intellectual appreciation of God no longer measures up to his appreciation of the things which God made. Thus, we should not be surprised to find some pseudo-intellectuals, educated in an atmosphere which ignores the necessity of religious maturity. Unless religious truth is integrated with the rest of the intellectual content of a college, such a college, while producing otherwise intellectual giants, is the breeding ground for religious morons. That man, however, whose advance in religious has kept pace with the rest of his pursuit of knowledge, finds God at the end of every telescope, sees the supernatural beyond the microscope, and appreciates all literature and philosophy as the aspirations of the mind and heart of man for the Beatific Vision of God. Such a man, and only he, is the balanced person, completely matured, equipped not only to cope with all the realities of life, but undismayed and unafraid; he can face worlds unseen and even the stretches of eternity.