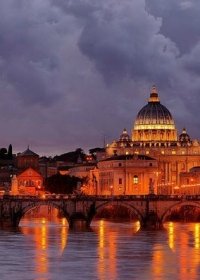 Now is not the time to be embarrassed by the faith.

Too often, the news of big cultural changes make us doubt our faith.

When we hear: After self-identified pro-lifers became the majority in 2008, we are back to a world in which most Americans identify themselves as “pro-choice.”

We start to think … After decades of work, the world has decided that protecting unborn life is not important, but protecting adult life choices is. Why keep fighting it?

When we hear: Even in the states with the highest church attendance, well below half of people attend; in the lowest, it’s below 17%.

We start to think … Maybe worshipping God was something primitive people did. As the world has gotten more sophisticated, worship has become less and less common. Maybe we should grow up too?

We start to think … We look like haters. Catholics’ antiquated morality of marriage has become an awkward relic of the past. Maybe it is time to admit that times have changed.

These are all natural reactions, but we should resist them. They aren’t true.

The world was created by God the Father through the Son and with the Holy Spirit. Jesus Christ became man to show us God’s plan for the world. We can trust him thoroughly, and the details of the faith show it.

We know more about unborn life than we ever have before. Doctors meet fetuses they operated on 22 years ago, abortion survivors tell their stories, and we have been watching babies grow in the womb for 50 years.

There is no escaping the truth: We have built one of the most barbarous civilizations in human history, one where 40% of new lives are ended violently, one where we abort 1 million children a year—and sell the body parts of many of them in a government-funded system our elected leaders don’t care to stop.

Then take church attendance in that context.

The argument that superior sophistication has led us away from churchgoing disappears when you lift the mask of respectability from our world.

It disgusts us that earlier churchgoing cultures, for instance, executed witches. But even high-end estimates put the number of witch executions at around 60,000—and that adds up victims over three centuries. The world today aborts more babies than that every day by 2:30 pm. With a record like that, the cruelty of past ages starts to pale in comparison.

Pope Benedict argued that it is the lack of worship that leaves our world so dark.

“It is precisely the person who desires only matter who dishonors it, robbing it of its greatness and dignity,” he wrote. “The Christian honors matter more than the materialist does by opening it up in such a way that here, too, God may be all in all. The person who seeks only the body diminishes it. Desiring only the things of this world, he actually destroys the earth. We minister to the earth by transcending it.”

Last, take the redefinition of marriage.

The Western world has changed the definition of marriage for the first time in history to have no intrinsic connection to the bearing and rearing of children. We decided that sexual morality that says “No” to anyone’s sexual desires is a form of repression and that insisting on the age-old definition of marriage is bigotry.

It is a very powerful temptation for Catholics to see the evolution of marriage as the consequence of a new enlightenment about sex. But consider the cultural changes that preceded our decision to redefine marriage:

● First came the sexual revolution which fulfilled none of its promises and left many lives a wreck.

● Second came a nationwide STD epidemic in which Americans every year contract 20 million new cases of just eight sexually transmitted viruses and bacteria and even the AIDS/HIV epidemic is making a comeback.

● Last came a pornography epidemic that has hurt everyone involved in it, from performers who regret being in it to performers who feel empowered by it, and those who use it—whether from a young age or as adults.

This proliferation of disease and addiction and brokenness doesn’t look like an enlightenment; it looks like a giant backsliding.

The new acceptance, respect and compassion for homosexual people is an important (and Catholic) corrective to the errors of the past. But too often we confuse acceptance with turning a blind eye to inconvenient facts—for instance, that gay marriages often become “open marriages,” that nature starts every single child with a mom and a dad for a reason, and that male homosexual sex is fraught with medical worries.

We owe it to the world to be confident about our faith—not cocky, not arrogant, but lovingly certain.

This is no time to be ashamed of the Gospel. This is a time to rejoice in a faith that has gotten so much right.

In the face of abortion, our faith sees the truth that others reject. So it is our job to give people hope that unborn life need not threaten adult lives.

In the face of declining church attendance in a world going dark, our faith remembers its importance. So it is our job to invite someone to church.

In the face of sexual confusion, our faith shows the beautiful simplicity of the truth that biology teaches: Every living person has a father and a mother. Our job is to help people accept nature’s plan.

In the future—and probably not as far in the future as you think—the truth will prevail once again. It always does. It is the way things are.  Our faith makes us confident of that.

As Jesus said, “Do not be afraid any longer, little flock, for your Father is pleased to give you the kingdom.”