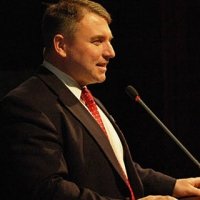 The Gregorian Institute helped bring the wisdom of G.K. Chesterton to Benedictine College in the person of author Joseph Pearce.

Pearce was raised in East London, England, and at 15 became a white supremacist, later a skinhead. He was an agnostic until he was in prison, where he discovered G.K. Chesterton. “Under grace,” Pearce said, “Chesterton was the biggest influence for my conversion.”

“Chesterton showed me that Catholics have all the fun,” he continued. “Chesterton is wonderful because he’s wonder-full.”

The works of Chesterton often address deeply moral and theological questions, but in language and stories that are light and almost childlike in their enjoyment and celebration of the world.

“We live in the best of all impossible worlds,” Chesterton once said. The seemingly paradoxical nature of that statement is typical of Chesterton. But, Pearce noted, “paradox points to deeper truth. The world is full of paradox.

“Christianity has paradoxes, but so does atheism, and the paradoxes of atheism are harder to believe.” For example, Pearce asked, how does an atheist reconcile the question of how nothing became something? Or how is it that math has imaginary numbers, such as the square root of negative one, or infinity, and yet atheists accept these numbers as real and fundamental to all of electricity?

The Christian belief in God as a Trinity is a

paradox, but atheists believe in similar triads: the trinity of three dimensions and the trinity of time consisting of past, present, and future. “God created the world. It makes sense that his fingerprints would be all over it,” Pearce contended. “The trinities in the world are the fingerprints of the Trinitarian God.”

Chesterton’s incorporation of paradox in his literature speaks to his being “wonder-full.” And his own wonder “teaches us to wonder,” Pearce said.

“Imagine that you are in a field with an atheist, a Muslim, a Hindu, and an agnostic,” he said, “and you are all facing east, waiting for the sunrise. As the sun comes up, you see it hover over the horizon, white. All of you think that it is beautiful, and it moves you. ‘It is good that we are here,’ you think. And you are filled with a sense of gratitude for the beauty and for being there to see it. But who to thank?”

The Christian, the Muslim, and the Hindu would know to thank the Creator. Even the agnostic might have a vague knowledge of this. But the atheist is left with an unsatisfied feeling of gratitude, unsatisfied because he does not know who to turn to in his gratitude.

“Beauty always leads us to God,” Pearce said. “And Chesterton taught me to see the sunrise.”