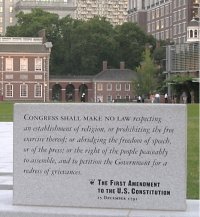 Members of Benedictine College’s Memorare Army for Religious Freedom prayer campaign can take heart: A new poll suggests that the American people are on the side of religious freedom.

One month after the Supreme Court legalized same-sex marriage, the poll suggest that Americans support religious freedom much more than they do gay marriage.

The Washington Examiner reported on the results of a survey by Caddell Associates, which asked questions on the relationship between religious freedom, same-sex rights, and the government.

The first question sounds a lot like a few scenarios we’ve seen in the news: Suppose a Christian wedding photographer has deeply-held religious beliefs opposing same-sex marriage. If a same-sex couple wanted to hire this photographer for their wedding, should the photographer have the right to say No?

The results were overwhelmingly clear: 82% said the photographer had the right to refuse. Even of the agnostics and atheists participating, 80% said so.

The report said “when asked which was more important, by a four to one ratio, voters said protecting religious liberty (31%) over protecting gay and lesbian rights (8%).” Notably, over half of the respondents (53%) said both were important.

on the relationship between the government and religious freedom. It asked whether participants thought the “federal and state government should be able to require by law a private citizen to provide a service or their property for an event that is contrary to their religious beliefs.”

Some 68% said that the governments should not make such a law, while only 18% agreed.

It also asked “whether it should be up to the federal government to determine what constitutes legitimate religious beliefs.”

Some 79% said no, and just 11% said yes. And these answers are not only from right-wing conservatives – two-thirds of the liberal participants maintained that the government should not decide what makes religious beliefs legitimate.

The Family Research Council also wrote on the subject, adding that most people polled said that “the military has no right to regulate the religious activity of military chaplains.”

So in the face of political actions taken against religious liberty, at least we know that the vast majority of the people believe that religious freedom is vital and should be fought for. And that is something to give us hope.

The Memorare Army has gathered more than 3 million Memorare prayers for religious liberty. Sign up here to join the prayer campaign.