Christmas in a Time of Terror 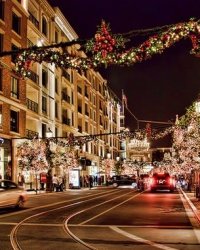 “It’s the most wonderful time of the year!” goes one of my favorite songs, “With the kids jingle-belling and everyone telling you, ‘be of good cheer’!”

“It’s Christmastime in the city,” goes another: “Strings of streetlights — even stoplights — blink a bright red and green.”

It’s that magical time of year when you meet smile after smile and life is sweet and safe at your office holiday party in San Bernardino, Calif. — or at Sandy Hook Elementary in Newton, Conn., three years ago.

So what do you do when all those wonderful feelings are torn apart by violence?

I will never forget one enchanting Christmas moment that ended in an epiphany for me.

I was driving through New Haven, Conn. — “rushing home with my treasures” — as a light snow began and Andy Williams came on the radio. It was like a drug delivering an intense euphoria of homey comfort into my bloodstream.

Then I saw it: pro-lifers protesting outside Planned Parenthood. One held an “I Regret My Abortion” sign. Another held one of those grisly photos showing what abortion does to children.

Instead of thinking dreamy thoughts of Christmas cheer, I realized that Planned Parenthood was doing its deadly business that Saturday morning two days before Christmas. I also recognized several of the protesters as people I saw regularly at Mass. They were skipping the dreamy sentimentality I was indulging in and spending their time defending real lives in the real world.

At first I deeply resented it. How dare they stick abortion in people’s faces on such an enchanting morning?

But then it dawned on me: Christmas-as-escape-from-reality is the opposite of what Christmas should be.

The first Christmas happened in a time of terror. Jerusalem was occupied by Roman soldiers. A blind bureaucracy called Joseph and Mary to make an ill-timed journey late in pregnancy. Mary gave birth in a stable far from home and then King Herod ordered the slaughter of the innocents, forcing the Holy Family to flee into Egypt.

The Christmas Story has never been the story of humanity’s escape into the magic and wonder of Divinity; it is the story of God’s decision to immerse himself in human violence, fear and hatred, from his infancy to his death on the cross.

John’s words tell the real hope that Christmas brings: “In this is love: not that we have loved God, but that he loved us and sent his Son as expiation for our sins.”

This is, in fact, the authentic end of the Christmas sentimentality we love.

Before becoming Benedict XVI, Cardinal Joseph Ratzinger once wrote that “nowadays a theologian or a preacher is all but expected to heap more or less sarcastic criticism on our popular way of celebrating Christmas … Christmas, we are told, has been commercialized irredeemably and has degenerated into a senseless marketing frenzy; its religiosity has become tacky.”

He admitted that the criticism is justified, but said it points to something deeper.

The “sentimental framework” we put on Christmas, he said, “provides the protecting shield behind which hides a noble and genuine sentiment that is simply reluctant to expose itself to the gaze of the other.”

In other words, Christmas sentimentality does the same job for our homes that an electrical transformer does: It takes the raw power coursing through world down a step so we can handle it.

Ratzinger said our Christmas gift-giving partakes of the same phenomenon: “Does it not originate in … the inner urgency of love, with its compulsion to share, to give of oneself to the other? And does not the notion of giving transport us directly into the core of the mystery that is Christmas?”

Christmas gifts are a great thing, but only because they point to “The one genuine Christmas gift to mankind, to history, to each one of us,” wrote Ratzinger: “None other than Jesus Christ himself.”

Violence shouldn’t kill Christmas cheer. It should deepen it.

“Tomorrow the wickedness of the earth will be destroyed,” says the Gospel acclamation on Dec. 24. “The Savior of the world will reign over us. “

This Christmas is a time to mourn the victims in San Bernardino, Colorado Springs and Paris — and the victims of ISIS, and to seek the justice God came to Earth to bring them.

And it’s also a time to fill stockings, put gifts under the tree and read “A Visit from St. Nicholas” (more commonly known as “Twas the Night before Christmas”) to remind each other that love is now and will always be the central force in the universe, because God is love.