Congress, a Bill, and Our Religious Freedom 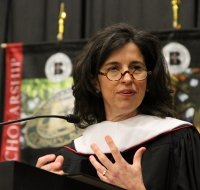 Last week, law professor and Vatican consultor Helen Alvaré said, “I am hearing from Congress that they are not hearing much about the First Amendment Defense Act, which would protect our religious institutions from losing their tax exemptions. I sent the legislation and talking points last month.”

Alvaré is a professor of law at the George Mason University School of Law, where she teaches Family Law, Law and Religion, and Property Law, and is a regular contributor to The New York Times, the Washington Post, the Huffington Post, and USA Today.

Alvaré came to Benedictine College in 2014 as the Commencement keynote speaker, when she addressed the graduates on love and religious freedom.

Alvaré’s work in the legal and family fields have led to her adamant support for the First Amendment Defense Act, which is now before Congress. According to the Congress summary of the bill, the Act “prohibits the federal government from taking discriminatory action against a person on the basis that such person believes or acts in accordance with a religious belief or moral conviction that: (1) marriage is or should be recognized as the union of one man and one woman, or (2) sexual relations are properly reserved to such a marriage.”

Discrimination by the federal government is

described as including “altering the federal tax treatment of, cause any tax, penalty, or payment to be assessed against, or deny, delay, or revoke certain tax exemptions of any such person; disallowing a deduction of any charitable contribution made to or by such person; withholding, reducing, excluding, terminating, or otherwise denying any federal grant, contract, subcontract, cooperative agreement, loan, license, certification, accreditation, employment, or similar position or status from or to such person; and withholding, reducing, excluding, terminating,
or otherwise denying any benefit under a federal benefit program.”

If passed, the Act would protect the tax status not only of individuals, but of religious organizations as well.

In support of this government protection of religious freedom, the Memorare Army is asking for:

Alvaré is fighting for the Act through her organization Women Speak For Themselves. Women Speak For Themselves was founded to give voice to those women who disagree with those in government and prominent organizations who claim to speak for all women in support of “women’s health” and “women’s freedom,” meaning birth control and abortion, rather that acknowledging that anti-family practices have been proven harmful to women and the family both physically and emotionally.

If the First Amendment Defense Act is passed, it will be a major reaffirmation of the religious freedom guaranteed by the U.S. Constitution. And we need that very much.