Courage and Faith on the Commencement Stage 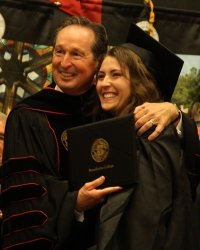 A remarkable story of courage and faith reached its climax on the commencement stage at Benedictine College in Atchison, Kansas, last weekend.

As Kristen Adlhoch walked off with her degree to her waiting wheelchair, everyone on stage had to wipe away tears — including commencement honorees Dayton Moore of the Kansas City Royals and Congressional Medal of Honor recipient Roger Donlon.

Stephen D. Minnis, president of Benedictine College in Atchison, Kansas, saw the hand of God — and the intercession of Mother Teresa at work in the event.

As a Freshman at Benedictine College in 2010, Kristen spent Thanksgiving break on a family trip to Hawaii with her parents and little sister. Then, on the last day of vacation, she tried surfing — and tragedy struck.

“None of us was very good at it, and we had a lot more falls than successful attempts, but we did have a lot of fun. By the end of the lesson my back was in pain, but I just assumed it was from lack of muscle use. As we were getting out of the water, I realized that my legs felt really weak, almost like they had fallen asleep. I was able to walk about 50 feet up the beach before I collapsed.”

By the time she got to the emergency room, she had lost feeling in both legs. Doctors determined she had suffered Surfer’s Myelopathy, a rare non-traumatic spinal cord injury that left her without the use of her legs. After five weeks, she was moved back to Colorado, where she continued physical therapy.

In the wake of her tragedy, the volleyball team created a card for Kristen. She was visited in her hospital in Colorado by President Minnis.

The college had opened the Mother Teresa Center for Nursing and Health Education that year on the 100th anniversary of her birth. Thereafter, the year had been dedicated to Mother Teresa with the theme “Do Something Beautiful for God.”

The novena lasted from December 13 to December 21. Hundreds of students, faculty, staff and friends of the college signed up to pray the novena prayer.

“That is worth so much more than any other kind of therapy,” said Adlhoch.

At first, she could not return to Benedictine, and took classes close to home at Colorado State University in order to keep up with her studies.  While she did, she underwent intensive physical therapy.

“She’s a tough kid,” her father, Joe, told the Denver Post. “She has her whole life ahead of her, and she wants to get going.”

New technologies helped her regain the use of her legs — and got her featured on the Today show. Reported NBC News: “Fifteen months after she collapsed on the beach, paralyzed from the waist down, Adlhoch walked across the Today studio, aided by crutches and an electronic device called the NESS L300 that stimulates her muscles, allowing her to walk.”

Minnis shared her story with students at an honors event the day before Commencement.

“After the novena was over, I did not want to stop,” he said. “So I committed to pray the prayer to Mother Teresa every day from December 2010, until Kristen graduated — praying that she would be able to walk across that stage at graduation from Benedictine College.”

He had trouble keeping emotion from interrupting as he said:

“Now, 4 and a half years later, Kristen will graduate from Benedictine College tomorrow and I hope you will join with me in awe as she walks across that stage to receive her diploma.”

When Kristen Adlhoch walked across the stage to receive her bachelor’s degree at Benedictine College, the auditorium erupted in cheering and a standing ovation.

Adlhoch leaves Benedictine College with a fiancé and a degree in Elementary Education, Special Education, that will allow her to help others who have faced the kinds of challenges she has.

“I am incredibly grateful to everyone who has been with me, prayed for me, and made life beautiful,” she wrote in a Thanksgiving post on Facebook. “I love you all immensely.”