Despite the Court, the First Amendment Stands 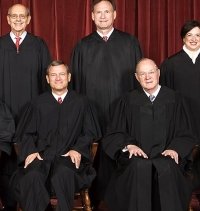 What has the Supreme Court done, and what has it not done in its Obergefell v. Hodges decision legalizing same-sex marriage?

What it has done is grab power from the people. More than 50 million Americans have voted against same-sex marriage. The Supreme Court has now told them that they do not have the power to write their own laws, prompting Chief Justice Roberts in his dissent to say, “Just who do we think we are?”

But what the Supreme Court has not done is abrogate the freedom of religion.

The great religions of all time: Christianity, Judaism, Hinduism and Islam all define marriage as between a man and woman. The Supreme Court today rejected their beliefs, but religious people must repeat early and often that, in America, we still have the right to exercise our faith.

Justice Anthony Kennedy in his majority opinion acknowledges this.

“Finally, it must be emphasized that religions, and those who adhere to religious doctrines, may continue to advocate with utmost, sincere conviction that, by divine precepts, same-sex marriage should not be condoned,” he writes.

He even waxes eloquent on the matter: “The First Amendment ensures that religious organizations and persons are given proper protection as they seek to teach the principles that are so fulfilling and so central to their lives and faiths, and to their own deep aspirations to continue the family structure they have long revered.”

Chief Justice John Roberts, in his dissent, goes further, reminding the court that religious freedom rights are constitutional — unlike the new right to same-sex marriage.

“Many good and decent people oppose same-sex marriage as a tenet of faith, and their freedom to exercise religion is unlike the right imagined by the majority—actually spelled out in the Constitution,” he writes.

He directly addresses Kennedy: “The majority graciously suggests that religious believers may continue to ‘advocate’ and ‘teach’ their views of marriage. The First Amendment guarantees, however, the freedom to ‘exercise’ religion.”

We must never let the words of the court be forgotten in the debates that will follow.

That said, the damage done by this decision would be hard to exaggerate.

In his decision, Justice Kennedy cited the truly sad stories from loving gay couples the court heard: women who were denied the ability to visit their partner in the hospital or inherit property from them at their death.

But instead of merely addressing those situations, the Supreme Court did something much bigger: It changed the very definition of marriage.

By redefining marriage the court has not changed reality; it has merely set up a situation in which the law refuses to recognize reality.

Marriage is exactly what Hillary Clinton once said it is. “Marriage is as a marriage has always been, between a man and a woman,” she said in the year 2000.

She saw marriage growing organically out of the nature of things: Men and women unite, men and women have babies, this new family needs protection. Marriage bonds husband and wife together for the sake of the child, it gives society a way to serve the new family, and it thereby bonds one generation to the next, for the good of all.

By redefining marriage, the Supreme Court no longer sees marriage as something that springs organically from the “family meaning” of our bodies. They see it as a social construct.

Marriage in the decision is not a life-creating force that the government must recognize and honor; it is now a system whereby the government favors some couples over others, based on whether or not they are willing to register their sexual relationships with the state. San Francisco, the first American city to experiment with redefining marriage, quickly found that this new “government marriage” quickly morphs into “open marriage.”

“Marriage is something sanctified between a man and a woman,” Obama said.

He was right, and the Supreme Court’s refusal to see any transcendent meaning to marriage—any sanctified purpose—will mean trouble.

“The family is also threatened by growing efforts on the part of some to redefine the very institution of marriage,” Pope Francis said earlier this year, in the Philippines. He warned of “powerful forces which threaten to disfigure God’s plan for creation and betray the very values which have inspired and shaped all that is best in your culture.”

We who know what marriage is and always has been must not be cowed by those who call us bigots.  We don’t hate gay people any more than we hate cohabiting people or divorced people—we just have a different view of marriage than they do.

We ask that they not hate us, either—and that we be given the right the constitution guarantees us, the right to exercise our faith.