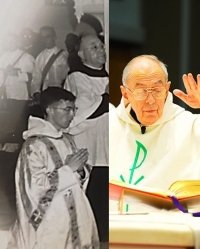 Last night around midnight Fr. Gerard Senecal passed away. He had suffered a stroke. Arrangements are pending. Fr. Gerard was an alumnus of the college, former President of Benedictine College, former Board member and former Pastor of St. Benedict Parish. Here we re-post an essay from June, 2013.

I knew Father Gerard Senecal’s voice before I knew him — a gruff voice, sometimes abrupt, on the other end of the phone. His voice was my first connection to Atchison, Kansas, a town I now call home. My husband was staying as a guest at the rectory; Fr. Gerard had agreed to shelter him during a one semester teaching stint at Benedictine College. They shared Father’s chicken soup, and talked politics over the rectory kitchen table, while I learned to know the shepherd’s voice in my daily telephone calls from Minnesota.

My husband and I were strangers to Kansas, but Fr. Gerard Senecal is a local Kansas boy. Born in 1929 in Atwood, Kan., he went to school in Atchison, graduating from Maur Hill Prep and Benedictine College. He was professed at the Abbey in 1949, and ordained to the priesthood in 1954. Fr. Gerard has served all four Atchison parishes; he has been a professor of physics and served as president of Benedictine College. He is currently pastor of St. Benedict’s and Sacred Heart parishes in Atchison, an assignment he has pursued with devotion and energy for more than 15 years.

In over half a century of priestly service, Fr. Gerard has tackled a myriad of challenges in areas ranging from finance to physics. At 84 years old, he boasts a daily schedule as full of energy and movement as the particles he once studied. Fr. Gerard has a rich legacy of service to Atchison Catholics, and he’s still game for a challenge. In July of this year, he will he will lay down his Atchison responsibilities and take up a new mission as the parochial administrator of Immaculate Conception parish in St. Mary’s and St. Stanislaus Parish, Rossville.

My telephone link to the Kansas rectory was soon followed by a permanent move to Atchison, where my husband joined the Benedictine College faculty. St. Benedict’s became our parish home, and parish life fixed us firmly within Fr. Gerard’s pastoral orbit. An interest in liturgy led to parish work, and I soon came to know Fr. Gerard as a pastor — the shepherd, not just the shepherd’s voice. In time, I began to perceive his dedication, and to understand the depth of his commitment to the flock entrusted to him.

No earthly shepherd is faultless; but much can be forgiven a shepherd who spends himself unsparingly for his flock. Fr. Gerard’s priesthood is not a job; it is his way of life. “You are a priest forever”, states the prayer of ordination, and for this Kansas shepherd, forever means 24 hours a day, seven days a week. He lives the pastor’s mission: to care for the souls of his flock, to know them, and to recognize their needs. He goes out into the city to find his flock. He haunts the hospital; his daily routine includes visiting the sick and delivering food to homes where it will be most welcome. Fr. Gerard’s surprise visits have ceased to surprise us; we never know when he will appear at our door, stopping by for a chat, eager to show off his latest photography. He seems transfigured by baptisms, and his camera immortalizes them all. Fr. Gerard wears his clerical collar the way other men wear their skin.

“I will fear no evil, for you are with me; your rod and your staff give me courage.” Psalm 23:4

The great Catholic writer Gilbert Keith Chesterton was intrigued by the practical wisdom of the ordinary priest. He writes somewhere of two undergraduate visitors who bemoaned the regrettable ignorance of cloistered religious life. Chesterton recognized the colossal the irony of their words. These two worldly young men, he remarks, knew “about as much of real evil as two babes in the same perambulator.” Not so, the parish priest. A pastor bears a shepherd’s burden: He teaches, preaches, and manages. He must ponder theological dilemmas, heal psychological damage, and stave off financial catastrophe.

The incident is said to have inspired Chesterton’s “Father Brown” stories — the famous tales of the priest detective, whose commonplace appearance masks a trove of practical wisdom and incisive wit. The Father Brown stories have always appealed to me. A priest makes an excellent solver of mysteries. Father Brown detects men, not clues; to know men and to know evil is a pastor’s daily task. After all, the confessional is hardly a place sheltered from worldly realities.

I’ve always detected a bit of “Father Brown” in Fr. Gerard; he shares several characteristics with the famous detective: commonplace appearance, wit, and practical wisdom. Fr. Gerard is realistic, direct, and sometimes demanding, but filled with trust in the providence of God and the action of grace.

In his book Light of the World Pope emeritus Benedict XVI comments on the qualities of men who are called to the priesthood. “The right man for the job,” says Benedict, “is a man of God, a true man of faith, and, above all, a man of courage.” Courage is an essential quality in a shepherd. It takes great courage to see the flaws and failures of one’s flock and still respond with love. Father Gerard has loved courageously, as a pastor should.

When we first began working together, Fr. Gerard often introduced me to other parishioners with a phrase that became a standing joke between us: “This is Claudia Crifasi,” he would say, “and she’s a pistol.”

It has become my favorite compliment, and one which I am happy to return: “This is Fr. Gerard Senecal; he was my pastor, and he’s a pistol.” He is a man of courage and common sense who shoots from the hip — appropriate qualities in a Kansas shepherd.

May Christ who is “the Good Shepherd and the Prince of the shepherds” guard and keep him all his days.