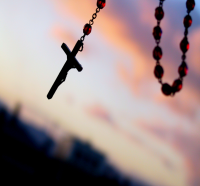 ISIS is very much on Catholics’ minds this Christmas, and one particular line of defense keeps coming up: the rosary.

We are asking every Memorare Army member to pray the rosary daily this Christmas for the defeat of ISIS. (The Memorare Army for Religious Liberty began when Kansas City, Kan., Archbishop Joseph Naumann invited Benedictine College’s President Stephen D. Minnis to launch a prayer campaign for religious liberty. Click here for details.)

A much-shared article on Facebook quotes an ISIS manifesto declaring that defeating the Pope is a key to their plans for world domination.

The Vatican is upping security in response to the threats this Christmas, but in a faith-filled decision by the Pope and a questionable decision by journalists, reporters have announced that Pope Francis will not be wearing a bullet-proof vest at public events.

What will he be doing instead?

For starters, praying the rosary. According to Our Sunday Visitor, he said:

“Mary joins us; she fights at our side. She supports Christians in the fight against the forces of evil. Especially through prayer, through the Rosary. … Do you pray the Rosary each day?”

The rosary vs. ISIS was a central theme in a remarkable interview with Fr. Jacques Mourad, a Syrian-Catholic priest kidnapped by ISIS. He told Rome Reports that the rosary made a crucial difference in his life:

“Mary, Our Lady, was always present and she helped keep me going from the first moment. Every time I prayed the rosary, I felt an extraordinary peace in my heart. I cannot explain it. “

The report said that thanks to the rosary, Fr. Mourad “was able to resist a constant threat he received during his 84 days of captivity: Convert to Islam or be decapitated.”

The rosary also gave him a remarkable hope:

“Despite all this, he said that he continued to believe that all people are children of God and that God does no wrong. With that same hope, he said he believes peace will someday come to Syria.”

The story is reminiscent of James Foley’s story.

Foley, a journalist who was captured and beheaded by Isis in 2014, had written about being held captive in Libya in 2011. At that time he said the rosary got him through it the experience.

“I began to pray the rosary. It was what my mother and grandmother would have prayed. I said 10 Hail Marys between each Our Father. It took a long time, almost an hour to count 100 Hail Marys off on my knuckles. And it helped to keep my mind focused.”

He and another prisoner “prayed together out loud. It felt energizing to speak our weaknesses and hopes together, as if in a conversation with God, rather than silently and alone.”

The Church has long put great faith in the Rosary as a “weapon” for peace. The Oct. 7 feast of Our Lady of the Rosary is itself a celebration of the victory a rosary campaign had against Turkish invaders. Centuries later, Our Lady of Fatima herself called for rosaries for peace on the eve of World War I.

After Sept. 11, 2001, St. John Paul II called for daily rosaries for peace and declared a Year of the Rosary, saying, “The Rosary allows us to hope that, even today, the difficult ‘battle’ for peace can be won.”

How many can you pray for the defeat of ISIS? Here is a quick primer on how to pray the rosary. Pray that the angels’ declaration will be true this Christmas: “Peace on earth and good will toward men.”