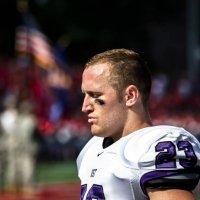 Read the USA Today story about a Catholic seminarian and you think you’re reading the National Catholic Register:

Sundays are sacred at the St. John Vianney Seminary, a plain five-story red-brick building across a grassy quad from the main chapel at the University of St. Thomas. It is the only day Jordan Roberts and 133 brother seminarians studying to be Roman Catholic priests may wear priestly garb for Mass — black cassocks with the white Roman collar.

Rising at 6 a.m., they begin their day with Holy Hour prayer and morning Mass. They end it with a rosary and lights out at 9:30 p.m. Last Sunday, seminary officials permitted Roberts a brief leave in late afternoon to join another fraternal group — his St. Thomas football teammates — to watch the NCAA Division III playoff selection show. Roberts is the Tommies’ top rusher and scorer.

The story describes Roberts as a 22-year-old recent convert from Sheridan, Wyo.

His seminary rector, Michael Becker, says that while the seminary sees a couple of students participating in athletics each year, Roberts is only the second football player in 25 years. He is a 6 foot, 222-pound junior tailback who leads Division III football with 24 rushing touchdowns, a school record. 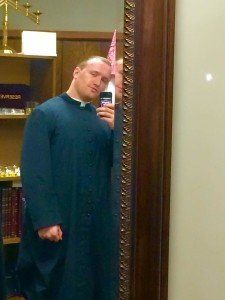 “God has given him a wonderful platform to witness his love for Jesus, his Catholic faith, and prayer life. We need athletes in general to be able to witness that, because young kids look up to star athletes.”

Roberts told the paper he converted in college when three events rocked his life several years ago: The day after he broke up with his girlfriend of six years, his best friend from high school committed suicide. Shortly thereafter, his parents got divorced.

He called the experiences “the greatest amount of pain I ever felt. …. All these things kind of made me search for answers.”

Teammates introduced Roberts to a FOCUS (Fellowship of Catholic University Students) Bible study. Then he went to FOCUS’s 2013 SEEK conference.

Roberts wears a wrist band that says “Pray for priests,” and his fans wave Vatican flags at his game.

He stressed to the Spirit that he is just a

seminarian, discerning his call in life:

“There are very few people that I respect more than priests, and I love the vocation of the priesthood,” he told the Spirit. “Right now, I’m discerning if that’s for me. It’s a process. I don’t really have an answer right now, but hopefully I will at some point.”

His message is already getting out. The Star Tribune sports section wrote about him in a story titled “Tommies’ Seminary student shreds St. John’s for 230 yards, 4 TDs.”

Along with telling the sports story, the column includes this quote from Roberts:

“God has a plan for all of us, and for me, it was to come to the seminary. And the fact I can play some more football at the same time just makes God’s gift to me even greater.’’

FOCUS recorded his testimonial in 2014. You can see it above.