From New Orleans to Kansas Monk 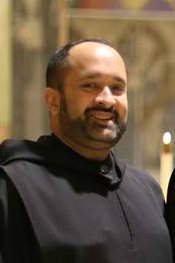 Joining chaplain Fr. Simon Baker and Benedictine College’s record 1,850 students is Fr. Jay Kythe, associate chaplain at Benedictine. Fr. Jay will be looking after the spiritual needs of the students through the 2015-2016 school year. We asked him about his vocation and his approach to leadership.

I was born and raised in New Orleans, Louisiana. I was there for 18 years. My parents are from India, and my brother was born there, so I was raised in Hinduism. My parents were going to move back to India but when I came along they decided to stay.

What sparked your conversion?

I went to Indiana University in Bloomington, Ind. While I was there I had times of darkness. I came from a sheltered home, and then I came on this college scene with drugs, sex, all of it. So I had this darkness and depression, even suicidal thoughts.

I became close friends with a Catholic, Rob. We’re still friends, 25 years later. He had this great peace in his life, and I wanted it. He was a great witness of his faith. I realized the source of his peace was his faith life. So I went to Mass with him once. I had this great feeling of God’s love and mercy.

I had been angry at God, and in that anger I had rejected him. I was a self-proclaimed atheist. But at that Mass, I realized that He exists and that He loves me. And I realized that it was something about the Mass that had done that, because I’d never felt that way before. So I kept going to Mass, and I started talking to the priest.

Nine months later I received baptism and communion at Easter Vigil in 1990.

One month before my baptism, someone asked me if I’d thought about becoming a priest. I laughed in their face. But I thought about it every day after that. I met someone at college that you may have heard of, Ted Sri. He was a student there also, and he had grown up with Rob. He introduced me to the writings of Josemaria Escrivá, who was very good for me. He also introduced me to a lot of Catholics. So there was a need for community right from the beginning. And then we all went to graduate school together.

Your parents were Hindi – what did

they think of your conversion?

My parents were very angry about it, and hurt. Hinduism is very cultural, it’s very traditional. You can visit any church, temple, synagogue, or service that you want, but you can’t convert. To convert means you are turning away from all your ancestors. But I wanted to tell my family that I loved them very much.

My dad actually suggested I study philosophy in grad school, and immediately I said I knew where to go – Steubenville. My family didn’t know anything about it, so they said Okay. Then they came to see the school and they were like, “Oh no, what have we done? This is a Catholic school, full of crazy charismatic people!”

While I was there I ended up in a household of people discerning religious life. I had a friend from St. Paul, Minn. who told me about the Companions of Christ. I went up to St. Paul and joined them. I lived with them during my formation and my growth, and I was ordained there. And then I became a parish priest.

How did you end up at the Abbey at Benedictine College?

While I was a priest in the Archdiocese of St. Paul-Minneapolis, I became friends with Drew Cozzens, now the auxiliary bishop of that diocese. I visited Benedictine College with him when he visited as an alumnus. I fell in love with the place and the monks. I started coming down for retreats after my ordination in 2002. I started talking with my Archbishop about monastic life in 2007. After a few years he said, alright, you can go and live with them for six weeks.

So I came down and spent the summer with the monks, and I went back to my diocese, and I said, “I love it!” And my Archbishop said, “Well, I’ve decided to move you to a new parish …” I was at that parish for a year. A lot of big things happened that year – my mom died suddenly from a heart attack, I had cataract surgery, I was moved to this parish with $1.7 million in debt, and the parish school was about to be closed.

I was only there for a year, though, before the Archbishop let me go to the Abbey.

It was a now-or-never thing, so my job had been to go to this parish, which was a very good parish that everyone in the diocese knew about but had started to go a little off track, get it back on track, and then say “See ya!” But the priest who went there after me was very good, and everything ended up well.

So in 2013 I came to the Abbey, did my postulancy and my novitiate, and then took first vows on December 8, 2014. First vows are for three years, so December 2017, God-willing, I will make solemn vows. I hope I do. I want to stay here!

You were a parish priest for years, and now you’re starting your second year as associate chaplain to 2,000 students. How do you like it?

I love it! Celebrating Mass is the best, whether I’m the main celebrant or a co-celebrant. As it should be. But it really ties in with my first experience in my conversion, when I went to Mass the first time. I love the Eucharist, and when I found out everything it was, I wanted to bring it to everyone. 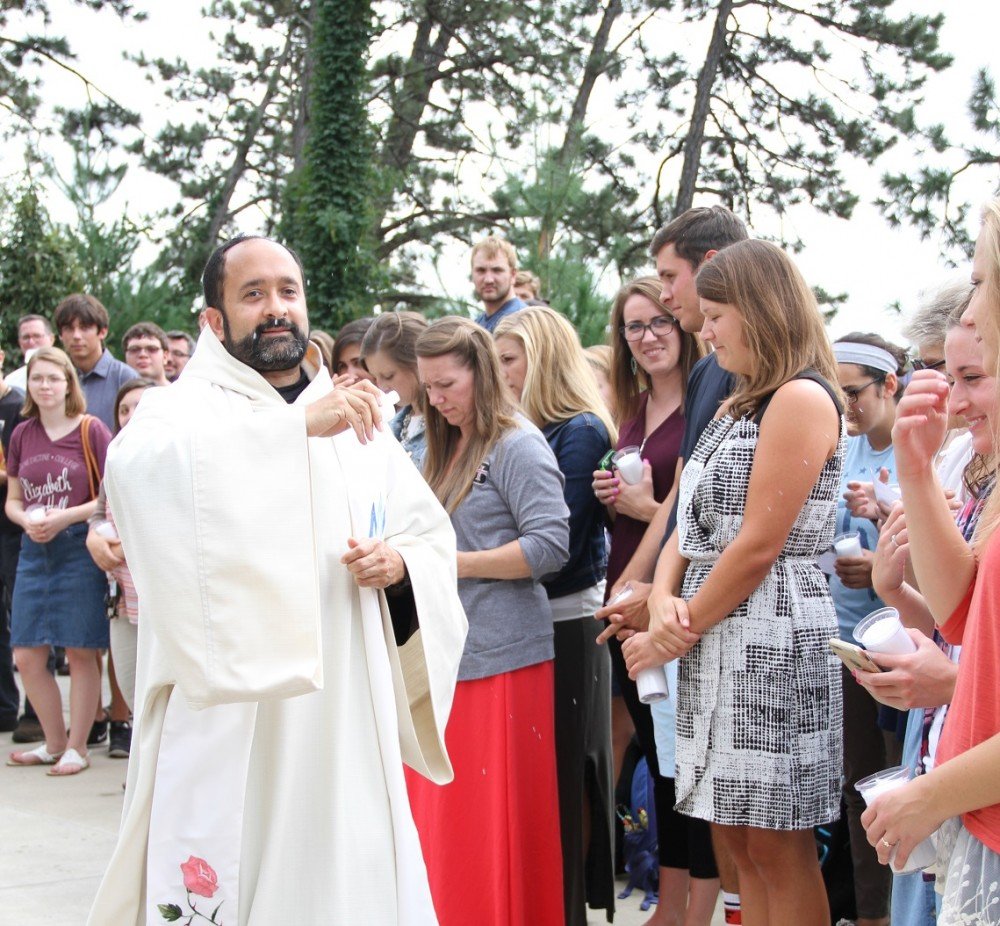 What’s your favorite part about Benedictine?

Oh, which part? I think the Catholicity. And I feel at home here. Someone recently described it as the Abbey sitting up on the hill and the graces flowing down from there into the campus. The monks pray for the students every day. I love the dynamic with the monastery at the center of the school, and Christ at the center of the monastery. And there’s the imagery of the bell tower, that you can see from all over, and knowing that Christ is underneath it.

Is there anything you miss from secular life?

No, not really. But I do miss things about pastoral life. Especially first communions. I mean, the kids are adorable, but they’re also difficult! But I loved them. First reconciliation, too. I had my own workshop that I did with them to prepare them for the sacraments. I’d see how many kids we could cram into a confessional so they weren’t scared of it when they went into it the first time. And we’d practice the “yucky faces” they’d make when they first tasted the wine to prepare for receiving the Blood of Christ.

What’s your passion? What gets you excited just thinking about it?

It’s very specific – pastoral counselling with men to help them with chastity. And just walking with them as they grow as men.

Is there anything you think people should know about monastic life?

Monks like having a good time. We like beer. And monks are very down-to-earth. I want to write a book called “Heard Around the Monastery” with all the funny things that have been said, and all the things that show that we’re all still growing. We’re all-too human. We even have scapular fights where we throw our scapulars at each other.

How has your old life affected your worldview?

I’ve realized that God has a point of view that’s different from ours. I’m always trying to obtain that view. I say that in confession – someone may confess gossiping or something, and I’ll say, “Well, how do you think God sees that person?” The world wants ambition, success, money, and power. But God wants humility. And there’s a strength and power in humility – I’m still trying to understand that! Benedictine’s theme this year, Called to Greatness, is about magnanimity, I think. Humble magnanimity is a wonderful thing. People recognize that in a person immediately, and they’re attracted to it. It’s important in the religious world, but also in the secular world. If a student wants to go into politics, say, they need to learn how to do that humbly and magnanimously instead of acting like stereotypical politicians who aren’t humble.

Is there anything you’ve noticed about the world that you don’t think other people have noticed, but should?