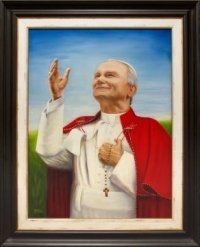 Ten years after his April 2, 2005, death, St. John Paul II continues to have a profound effect on the Church.

Commentators often miss what made John Paul a world-changing genius: He did what many consider impossible —he changed the daily life of the billion-plus Catholics he led and reset the trajectory of the Church.

He did this by creating “facts”: Concrete practices which made his wishes into realities. Some quick examples:

• He didn’t just exhort the youth to rediscover their faith — he started World Youth Days and made it happen.

• He didn’t just ask Catholic institutions to follow the magisterium — he promulgated a new Universal Catechism, making it difficult not to.

• He didn’t just say we are all integral parts of the Church — he traveled worldwide to show it.

• He didn’t just ask us to rediscover Christ — he rebranded the Year 2000 as a Jubilee Year devoted to Jesus.

Nothing shows this leadership style more clearly than his last five years of life. In 2001, he summed up the Great Jubilee in his apostolic letter Novo Millennio Ineunte (At the Beginning of the New Millennium), and then “earnestly exhorted” the Church to follow his “program” for “starting afresh in Christ.”

True to form, he didn’t just ask for a program. The aging, ailing pope then tirelessly turned his requests into “facts.” Here are four wishes that he spent his last years pursuing in his inimitable way.

First, the Pope asked the Church to promote the Sunday Eucharist.

John Paul’s highest priority for the Church was “The Sunday Eucharist.” Not daily Mass, not First Fridays, not Eucharistic adoration. As beautiful and beneficial as each of those are, John Paul saw the Sunday Mass as the key.
St. John Paul knew that the act of committing to Sunday Mass is transformative. When a family decides to go to Sunday Mass every week, God becomes their center and identity: their one non-negotiable appointment, their weekly connection to their neighbors. For a Sunday Mass family, God is the anchor and the tie that binds.

John Paul didn’t just ask for this, he spent the next five years creating “facts” to make it so. He declared a Year of the Eucharist, wrote an encyclical, and, for English speakers, oversaw a process that reformed the Roman Missal and re-translated the Mass, attracting Catholics with novelty and authenticity, both at once.

Next, John Paul called for bishops to have the “courage, confidence and creativity” to re-establish the sacrament of reconciliation in their dioceses.

When he spoke of the crisis in the Church in 2001, he meant the abandonment by many Catholics of confession, and saw it as the root of a crisis of the sense of sin in the world. In a 2002 Holy Thursday letter to priests, he connected this with the priest scandals: If a priest is willing to offer the Eucharist to his flock without offering confession, he has become desensitized to mortal sin and that way lies grave danger.

In his 2003 Eucharistic encyclical, the Pope used formal language to demand that the Church rule still applies, that “in order to receive the Eucharist in a worthy manner, one must first confess one’s sins, when one is aware of mortal sin.”
He followed up his plea, again, with a “fact.” Easter Sunday II is the Sunday in which the Gospel recounts the story of the Institution of the Sacrament of Reconciliation. In 2001 the Pope made that day Divine Mercy Sunday, carrying an indulgence for those observe it and confess. God and the Church ratified his decision: He died on Divine Mercy Sunday in 2005, was beatified on that day in 2011 and then canonized on that day in 2014.

In the section of the letter about the primacy of grace, St. John Paul said, “As this millennium begins, allow the Successor of Peter to invite the whole Church [to] a renewed commitment to prayer.”

“Without Christ we can do nothing,” he said; it is not “the ability to act and plan” which would transform the Church, but Christ himself found in prayer.

He asked specifically for scripture-based Lectio Divina prayer, which was also endorsed by his successor. “If this practice is promoted with efficacy, I am convinced that it will produce a new spiritual springtime in the Church,” Pope Benedict XVI said of Lectio Divina.

Pope John Paul then followed up with a series of General Audiences on the Psalms. But most significantly, he promoted the Rosary.

When the Sept. 11 terrorist attacks had the attention of the world, John Paul asked all Catholics to pray the rosary every day for peace.

Then came one of his signature “facts”: He created five new mysteries of the rosary, raising curiosity and injecting new vigor into the ancient prayer. Along with the new mysteries came a “Year of the Rosary,” repeating and formalizing his call for daily rosaries.

It worked: My family is one of those who committed to the daily rosary for the first time in response to these extraordinary papal measures.

Fourth is serving the poor.

Citing the last judgement in Matthew 25, John Paul asked Catholics to “Stake everything on charity.”

He asked that we “ensure that in every Christian community the poor feel at home.” He tied this to the New Evangelization, saying “The charity of works ensures an unmistakable efficacy of the charity of words.”

Again, he followed this up with a fact: He beatified Mother Teresa in 2003, on World Mission Sunday. He asked Catholics to follow her example, calling her “an icon of the Good Samaritan.” He died in 2005, leaving behind writings that became the encyclical Deus Caritas Est by Pope Benedict XVI, proposing Mother Teresa as a model of Christian service and prayer.

There are other requests in the document that he followed with “facts” — importantly, ecumenism — but these four are wishes that we lay Catholics in particular can fulfill.

The beauty of his “program” is its simplicity. No need for anything complicated. Convince people that Sunday Mass (the Third Commandment, after all) will help their family, share how healing confession is, ask them to pray the rosary for peace in our troubled times, and start serving the poor.

These basic practices are simple to explain, they are an easy sell for most people and, when followed, they transform lives. If we do them, we will spark a major religious renewal.

What better way to honor St. John Paul the Great?