How Francis Made Religious Freedom a Key to His US Visit 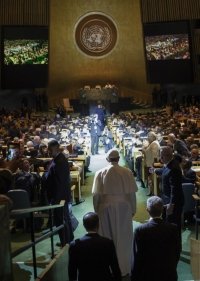 In Pope Francis’ visit to America, religious freedom was a key theme in his public addresses from the White House to Independence Hall in Philadelphia.

But even more significantly, it was the center of Pope Francis’ unscheduled meetings: With the Little Sisters of the Poor, and with Kim Davis, the clerk who went to jail for preventing her signature from being used on marriage certificates for same-sex couples, and in his remarks on the airplane on the way home.

When President Obama met with Pope Francis, the president said: “You remind us that people are only truly free when they can practice their faith freely.” He added: “We stand with you in defense of religious freedom.”

The words there are important: so often the President has attempted to make religious freedom simply about religious worship.

Pope Francis responded by taking it one step further: “All are called to be vigilant, precisely as good citizens, to preserve and defend that freedom from everything that would threaten or compromise it.”

But beware of what Obama promises Catholics. At Notre Dame, he said “Let’s make adoption more available,” before backing same-sex marriage laws that have closed many leading adoption agencies that happened to be Catholic and promised a conscience clause before pushing the HHS mandate which requires Catholics to provide contraceptives, including drugs that the FDA says can cause abortions.

The next significant religious freedom news were Pope Francis’ unscheduled meetings, which seemed to show where his heart is.

First was the meeting with the Little Sisters of the Poor, who are having to defend themselves from the Obama administration, which is attempting to force them to provide contraceptives and abortion-causing drugs to their staff.

The visit “gave us a lot of moral support and confirmed we are on the right track with the lawsuit as far as the church is concerned while we wait to see if the Supreme Court will take the case,” Sister Constance Veit told NBC.

Two other meetings were also significant: One, with a former student of Pope Francis’ who is a homosexual and one with Kentucky court clerk Kim Davis.

Neither visit was initiated by the Holy Father, so neither is as significant as the Little Sisters of the Poor visit. But both are important.

Yayo Grassi, a former student, brought his partner, Iwan Bagus, and several friends to see the Pope at the Vatican Embassy in Washington. Pope Francis warmly embraced him.

News later broke that he also met with Kim Davis, the clerk who was jailed because she refused to allow her signature to be used on same-sex marriage certificates.

Stories have painted Grassi’s visit as a sign of Pope Francis’ embrace of his former student’s morality and have treated his visit with Kim Davis as a manipulation of the Pope by interest groups.

It may very well be almost the opposite, however.

Pope Francis’ embrace of Grassi merely does what the Catechism of the Catholic Churches says: homosexuals “must be accepted with respect, compassion, and sensitivity. Every sign of unjust discrimination in their regard should be avoided.”

And in the airplane on the way back to Rome, Pope Francis made comments that show where he truly stands on these visits.

First, he supported the fundamentals of Davis’ cause: “government officials have a ‘human right’ to refuse to discharge a duty, such as issuing marriage licenses to homosexuals, if they feel it violates their conscience.”

Second, he strongly criticized Rome’s mayor, who tried to bask in the reflected glory of the Pope’s visit to Cuba. “Pope calls Rome mayor a ‘pretend Catholic’ who supports gay marriage and euthanasia,’ said the Christianity Today headline.

Pope Francis is clearly enraged by the mayor – the Nancy Pelosi of Rome.

In his speech at Independence Hall in Philadelphia, where the founders signed the Declaration of Independence, he echoed his U.N. speech calling religious freedom “a fundamental right.”

He said religious freedom couldn’t be limited to the right to worship, “Because religion itself, the religious dimension, is not a subculture; it is part of the culture of every people and every nation.”

He pointed where the denial of religious freedom would head, pointing to “the atrocities perpetrated by systems which claimed to build one or another ‘early paradise’ … denying them any kind of rights.”

He said America was different. Standing in the seedbed of the American experiment, he reminded Americans what it was for: to be “a haven of religious freedom and tolerance.”

Religious freedom was a major theme of Pope Francis’ visit – and his marching orders for American Catholics are clear. Don’t water down religious freedom, and sacrifice to the full measure to defend it.

The Memorare Army is fighting to do just that. You can find more information on the Memorare prayer campain for religious liberty here.