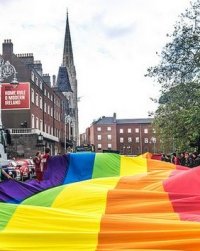 The Memorare Army for Religious Freedom was started to address attacks on religious freedom in the United States. But the prayer campaign has attracted members from all over the world – and recent news in Ireland shows that our prayers are needed everywhere. You can join the Memorare Army here.

First a referendum allowing gay marriage was passed in a landslide vote in May, legalizing such unions in November. Then last week Dáil Éireann, one of Ireland’s Houses of Parliament, unanimously voted to repeal Section 37 of Ireland’s Employment Equality Act in favor of homosexuals. Section 37 says, in part:

“A religious, educational or medical institution which is under the direction or control of a body established for religious purposes or whose objectives include the provision or services in an environment which promotes certain religious values shall not be taken to discriminate against a person if it gives more favourable treatment, on the religion ground, to an employee or a prospective employee over that person where it is reasonable to do so in order to maintain the religious ethos of the institution, or it takes action which is reasonable necessary to prevent an employee or a prospective employee from undermining the religious ethos of the institution.”

In other words, repealing this clause will allow efforts to “undermine the religious ethos” of religious institutions.

Rather than protecting the very meaning of

these institutions, grounded in religion and their founders’ faith-formed consciences, legislators have decided to give active homosexuals the license – not the liberty, the license – to encourage the people in that institution to live as they do – including the students of Catholic schools.

The Irish government has chosen the license of a few against the natural and conscience-based religious freedom that all people are entitled to by virtue of their humanity.

Sandra Irwin-Gowran, Director of Education Policy with the Gay and Lesbian Equality Network, said that private institutions are next: “Further progress remains to be made for privately funded religious-run institutions.”

Activists will continue to insists on redefining rights. That is why we need to pray without ceasing for religious liberty to be defended and promoted in the public square. To help, join the Memorare Army here and unite your prayers with the 3 million being prayed around the world, from America to Australia to Ireland.