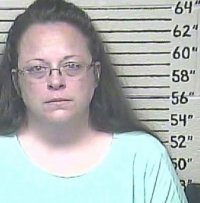 Kim Davis, the Rowan County, Ky., clerk jailed for refusing to issue marriage licenses to same-sex couples is at the center of a debate among Christians.

The problem is that her signature appears on all marriage licenses issued by her office. She decided that she could not in good conscience certify as marriages relationships that her religion says are not marriages. U.S. District Judge David Bunning charged her with contempt of court and said Davis would remain behind bars until she complies with a court order to certify them.

Is she a religious-freedom hero? Or is she wasting her time?

Whatever the answer, on this Memorare Monday we should pray for religious freedom for Kim Davis and all Christian Americans at this difficult time. (If you have not done so, join the Memorare Army here.)

One answer: She’s no hero.

The case of the Muslim cab drivers has been called in as an explanation. The Minneapolis-St. Paul Airport has been struggling for years over the issue of Somali Muslim cab drivers refusing clients who were carrying alcohol or dogs; this made them complicit in sin and made them unclean, they said. The airport has been attempting a series of sanctions that make their life difficult.

Many commentators were quick to take umbrage at the religious decision of the cab drivers. The strangeness and strictness of their rule — and the fact that blind people with guide dogs were among those left without a ride — made it distasteful to Americans.

The argument against the Muslims: If you don’t want to transport everyone at the airport, you shouldn’t queue up at the taxi line.

The same argument has been made to Davis: If you didn’t want to marry whoever the government says to marry, you shouldn’t have gotten into the government marriage line of work.

Another Answer: Yes. Her stand is heroic.

But Davis isn’t like the cab drivers at all, say others. She worked in the marriage license business first, and then they changed the rules.

Her case is more like this: Imagine a Muslim gets a job at a grocery store and is assured from the beginning that he will never have to handle pork. Then he wakes up one day to find out that the Supreme Court has just decided to redefine “pork.” Henceforward, pork will be called “chicken.”

What does he do when his boss says, “Okay, here’s some chicken for you to handle!” and plops a pound of tenderloin in front of him? Is he obligated by conscience to pretend, along with the Supreme Court, that pork is chicken?

This is how the issue appears to many Americans. As Hillary Clinton put it in the year 2000: “Marriage is as a marriage has always been, between a man and a woman.” She was right. Calling a tail a leg doesn’t make it a leg, calling pork chicken doesn’t make it chicken, and calling new relationships marriage doesn’t make them marriage.

If this is true, then Kim Davis is doing the right thing: Following her conscience. The fact that she is following it even to jail is heroic.

A third answer: There is no hero without a villain.

And yet … there may be a third answer.

He agrees that Davis didn’t cause the problem — the Court did, by redefining marriage and therefore her job.

He pointed out that North Carolina foresaw just such a conflict and helped accommodate its employees:

“The North Carolina law made clear that no eligible couple could be denied a marriage license, but officials could recuse themselves should they have sincere objections.”

Meanwhile, Kentucky escalated the conflict rather than de-escalating it:

“Kentucky accommodates conscience for other licenses. Why not marriage? Yet Gov. Steven L. Beshear issued a mandate telling all county clerks to issue licenses to same-sex couples without exception. When asked to call a special session of the Legislature to try to work out a reasonable accommodation, he said it could wait until January.”

Of course, Davis’s stand can be heroic, even if Ryan is right.

Joe Davis, her husband, told reporters his wife will stay in jail until her name is off those licenses.

“As long as it takes,” Joe Davis said. “Hopefully [Gov. Steve] Beshear will have the guts to do his job.”

He is right. Davis’ decision to follower her conscience deserves respect; that she has to go to jail to do so is a colossal failure by her government.