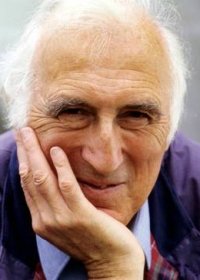 This spring, Jean Vanier, one of the great Catholic men of our time, was awarded the Templeton Prize.

Vanier is the 86-year-old founder of L’Arche, communities for people with developmental disabilities.

As such, he is one of the foremost pro-life advocates of our time — because he was a tireless advocate of the dignity of all people.

The honor spotlights the beauty of his Catholic message of love and service to all.

As a child, his family fled Paris with the advance of the Nazis, and he later helped serve survivors of Nazi concentration camps, an experience that changed his life. He left a career in academia to found L’Arche communities for the developmentally disabled in 1964.

He has been honored by Canada, France and the Vatican. Several schools and even an asteroid have been named after him.

Today, 147 L’Arche (The Ark) communities exist in 35 countries on five continents. The communities give disabled people the freedom and support to mature and build their lives together. While the approach of L’Arche is informed by the Catholic faith, the centers are not exclusively Catholic.

“Each person is sacred, no matter what his or her culture, religion, handicap, or fragility. Each person is created in God’s image; each one has a heart, a capacity to love and to be loved.”

Kathryn Jean Lopez once suggested he be given a Nobel Prize. Instead, he has now been awarded a Templeton Prize — which the late Sir John Templeton conceived as an answer to the Nobel Prize. In setting the monetary value of his award, “Sir John made sure it surpassed the Nobel prizes, in which spirituality was ignored,” said his obituary in The Economist.

Jennifer Simpson in announcing the award said of Vanier:

“His powerful message and practice of love has the potential to change the world for the better, just as it has already changed the lives of countless individuals who have been touched by this extraordinary man.”

Vanier still lives on the grounds of the original L’Arche community north of Paris. He received the prize at the church of St. Martin-in-the-Fields in London on May 18.

The Templeton Prize has posted wonderful video interviews with Vanier, including this one above (or here if you are seeing this on email) which  is mislabeled. It is about “conscience,” not “doubt.”