Jim and Jeannie Gaffigan and the New Evangelization 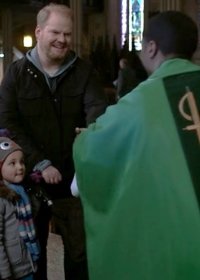 In interviews, Jeannie Gaffigan says she and her husband Jim are not trying to evangelize.

But in a postmodern secularist world, maybe evangelization has to be indirect.

“The Jim Gaffigan Show” starring the comedian and produced by his wife, is about the life of a comedian living in New York with his “Shiite Catholic” wife and five kids. (See it at TV Land or on Hulu. Here’s the pilot.)

If viewers don’t like this show, Jim told World magazine, “There are only two people to blame, Jim and Jeannie. And it’s Jeannie’s fault.”

Jeannie also seems to be the brains behind their presentation of the faith. She says she is not trying to gain converts.

“We’re just a Catholic family,” she told HNGN. “We don’t go and proselytize to other people. We don’t say, ‘You should be Catholic too.’ We just live our lives and try to keep our family together and go to church and stuff like that. But we don’t judge or try to force our belief system on anybody else.”

The shows are peppered with jokes about Catholicism. In the first episode he Jim wants to avoid sinning because “The Pope will find out and take us off the mailing list.” When he comes to church, the priest is surprised to see him. “I thought you were a widow,” he tells Jim’s wife.  In the “Bible Story” episode Jim quips: “Catholics don’t read the Bible. That’s why they give us CliffsNotes on Sunday.”

The self-deprecating, non-confrontational approach is part of their plan to keep critics at bay — and keep a place at the table. 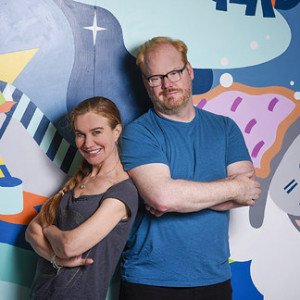 to the culture that the Gaffigans are not hostile to it. The first episode is about a vasectomy. It mentions the Church’s teaching against the procedure but doesn’t exactly treat it as the last word. (Spoiler alert: Jim eventually refuses the surgery.) The show also establishes a gay best friend as a major recurring character.

Jeannie said she is anxious to make sure the show adequately represents their faith, also. After considering acting in the show, she decided against it.
Jeannie and Jim Gaffigan

“I went into the background as a producer and realized that if Jim was in all the scenes, who was going to be there to make sure that this was our point of view?” she told HNGN.

Jeannie told World that it is hard to address the faith in the entertainment world, given the vastly different sensibilities in “church circles” and in the secular marketplace.

“You can’t really win,” she said. When a headline said her show was about “real life, not religion,” Twitter followers complained that she was falsely separating the two.

The Gaffigans have learned to tread carefully, reviewing each other’s tweets before sending them out to a world that is often hostile to the faith.

“People, I think, are ready for a fight,” she told HNGN. “I had a tweet where I said, ‘We’re all one tweet away from career suicide.”

Ken Chitwood, who teaches at the University of Florida, sees a modern approach to faith in the Gaffigans. “They are not this super holy, sanctimonious family,” Chitwood told Religion News Service. “They kind of hold their Catholicism lightly.”

“They are able to show Jim as this new kind of Catholic,” he said. “He is mainstream, he is funny, and he is friends with Chris Rock.”

And that gives being Catholic a spotlight in a new place.

“It’s just something that we are,” Jeannie Gaffigan told World. “We made the decision not to hide the different sectors of our life. There’s the church and the comedy club.”

And sometimes both at once.