Kateri Was Canonized for Our Dark Times 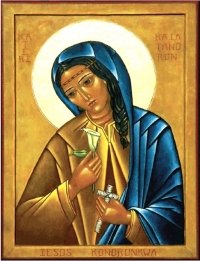 “In the wilderness of North America, in primitive and difficult times, Saint Kateri was a ‘sign of the Kingdom of Heaven.’” — Mass to celebrate St. Kateri Tekakwitha

In our tumultuous times, we need a great saint to turn to — a saint who knows how to handle a world where the faith is out of favor and the future looks bleak.

We need St. Kateri Tekakwitha, whose feast is July 14.

Here are four reasons why.

1. Because the Pope entrusted the renewal of our faith to her.

Pope Benedict XVI said it clearly the day he canonized Kateri in 2012. Addressing the new saint, he said: “We entrust to you the renewal of the faith in the first nations and in all of North America!”

With God, there are no coincidences, and the Church gives us saints suited to our times: St. Gianna Molla in the age of abortion; married saints Luis and Zellie Martin later this year as marriage comes under attack.

Kateri Tekakwitha was canonized in 2012, as a surge in cultural atheism swept America.

That was the year activists, including city officials, started a bullying campaign against Christian-owned Chik Fil-A restaurants, showing that “tolerance” was not really their thing after all.

Politicians and the media labeled the right to life a “war on women” that year – even as sex selection abortions were embraced in Great Britain for parents who wanted to kill their girls, and abortionist Kermit Gosnell’s house of anti-woman horrors was exposed in Philadelphia.

The year 2012 saw a social sea-change as voters redefined marriage in Maine, Maryland and Washington and President Obama officially changed his position.

The U.S. bishops held the first Fortnight for Religious Freedom in response to Obama’s HHS mandate attacking Catholic conscience rights. The Vatican convened a Synod on the New Evangelization and declared a Year of Faith.

Then, into this dark culture rejecting God, the Church inserted a new saint: A native American born in the same city that saw the Catholic missionaries St. Isaac Jogues, René Goupil and John LeLande martyred brutally 10 years before her birth.

“May her example help us to live where we are, loving Jesus without denying who we are,” prayed Pope Benedict.

Unfortunately, we American Catholics are not very good at that.

We want to accommodate with “where we are” as much as possible. We try to partake of the frat-house pleasures of modern America as much as we can without crossing the “mortal sin” line. But dancing on the edge of bare minimum morality makes us unhappy legalists, not joyful witnesses to the freedom and hope of Christ.

St. Kateri showed a better way. She was self-possessed and firm in her convictions — even “in spite of the absence of external help,” said Pope Benedict, “by the courage of her vocation, so unusual in her culture.”

After learning about Jesus Christ initially from her mother, she rejected the arranged marriage her family had planned for her. She had to study the Catholic faith in secret, and when she was baptized as a young woman she was ridiculed and scorned by her people.

Her response was to live her faith anyway, regardless of what they said, and then to enter consecrated virginity.

3. Kateri embraced what was best in her culture.

“She worked, faithful to the traditions of her people, although renouncing their religious convictions, until her death at the age of twenty-four,” said Pope Benedict.

Kateri’s method is important to note: She embraced her personal Christian principles in the midst of her people, without turning her back on them or rejecting their legitimate ways.

Pope John Paul II in his beatification homily added the beautiful detail that Kateri was baptized “when following her tribe in the hunting seasons” and that she made her first Catholic devotions “before a rough cross carved by herself in the forest.”

Pope Francis in Laudato Sí praises indigenous people’s values. The Mohawks had many virtues to recommend them: Not only harmony with nature, but harmony with the nature of things — they had no desire to redefine marriage away from its primary purpose of parenthood, for instance.

We can follow her example and embrace what our culture gets right: concern for the marginalized, desire for transparency, authenticity and more, while rejecting what it gets wrong.

4. She was a living witness to Jesus.

“Leading a simple life, Kateri remained faithful to her love for Jesus, to prayer and to daily Mass,” said Benedict. “Her greatest wish was to know and to do what pleased God. She lived a life radiant with faith and purity.”

Kateri was known for her gentleness, kindness, and good humor. Her favorite place was in front of the Blessed Sacrament. She was also known for her harsh penances — whipping herself in reparation for sins and to build self-discipline (that sounds harsh to us, but maybe it shouldn’t).

For Kateri, at first in her village and later in Montreal, evangelizing others consisted in personal conversion and the witness of an authentic life. This is exactly what Pope Francis wants of us.

When Kateri died on Wednesday of Holy Week in 1680, her last words were Iesos konoronkwa — “Jesus, I love you.”

Those should be the first words in the renewal of faith in America.