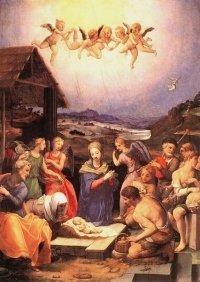 Once again, the peacefully public celebration of the world’s dominant belief – Christmas – is offending people. And, once again, these insulted people are fighting back in the annual “War against Christmas.” You can fight back by joining the Memorare Army here.

In Indiana, a judge has banned a public high school from performing a live Nativity scene as part of their annual Christmas Spectacular. The judge ruled after an anonymous student – just one – and his father filed a suit with the American Civil Liberties Union and Freedom From Religion Foundation.

As FFRF Co-President Annie Laurie Gaylor said, “A live nativity is a shocking violation to encounter in a public school, which has no business directing students to engage in devotional, sectarian performances. This decision is a win for everyone who recognizes that there can be no freedom of religious belief without freedom from religion in government and in our public schools.”

Anyone who believes that freedom of religion is contingent on freedom from religion needs to take a logic class.

As USA Today said, ACLU attorney Heather Weaver shares the FFRF’s position, saying that “all students, regardless of religion, will now feel welcome at the show.” Except, of course, the students who wanted the Nativity scene in the play …

On a larger scale, back in November the U.S. Department of Veterans Affairs medical center issued a memo stating that staff could only celebrate “private religious expression in their personal work areas that are not regularly open to the public.”

The memo reads, in part, “The Salem VAMC Executive Leadership Team wishes to extend our wishes for a happy holiday season in a manner that is welcoming to all. To that end, public areas may only be decorated in a manner that is celebratory of the winter season. Displays must not promote any religion.” Because, clearly, the most welcoming way to celebrate religious holidays is by forbidding all symbols of those holidays.

It continues, “When the public accesses the Federal workplace, their reasonable impression should be that the government is not sponsoring or endorsing one religion over another.” As per the Constitution, this is true. However, the cooperative answer is not to deny everyone their freedom of expression, but to allow public symbols of all the winter religious holidays – Christmas, Hanukkah, Kwanza, and any other that the employees may celebrate. Rather than stifling religious expression, the medical center should embrace it in its diversity. Making everyone unhappy in the search for equality is never a constructive answer.

Even visiting pastors have been brought into the ban. Pastor John Sines, Jr reported that he was allowed to sing “Rudolph the Red-Nosed Reindeer” and “what they referred to as ‘holiday songs,’” but nothing “that had the word Christmas in it” during Christmas performances.

In parts of North Carolina and Colorado, the group American Atheists have put up billboards with messages to separate religion from the celebration of Christmas. The billboards read, “Go ahead and skip church! Just be good for goodness’ sake. Happy Holidays!” accompanied by a picture of Santa Claus smiling.

David Silverman, president of American Atheists,
said that this year’s billboards are a sequel to last year’s, which said, “Dear Santa, All I want for Christmas is to skip church! I’m too old for fairy tales.” “This year, Santa wrote back,” Silverman said.

Meanwhile, the “War on Christmas” rages in the United Kingdom as well. In Birmingham, England, a  third generation street florist who raises money for the local Children’s Hospital with his festive display has been issued an order of silence by council officials for playing Christmas music at his stall.

Allan Poole has been setting up shop for nearly 40 years and playing Christmas music for the last 10, always without a problem. His stand is on the edge of the Birmingham German Market, in which all the vendors play music appropriate to their religion. But Poole has been accused of breaking section 62:1b of the Control of Pollution Act 1974, which bans the use of advertising a person’s business through a sound speaker, even though he has never played anything but traditional Christmas music through his speakers.

Poole is refusing to stop his music until he has fought in court and is officially banned from playing music. The traffic on the website supports his decision – according to the website’s poll, 94% of readers think that Poole should be allowed to play his music, as it is “the season to be jolly,” while only 6% are “sick of being bombarded with it from everywhere.”

The “War on Christmas” is not all bad news, however. In Wadena, Minn., a citizen complained about having a Nativity set in the park. It was removed, and the rest of the town responded by setting up their own Nativity sets in their homes and private businesses. Even the original spot in the park’s bandstand has one – an inflatable Nativity scene has replaced the original plaster one since a former resident of Wadena realized the town’s laws allowed groups to rent the bandstand for the day. Now a group has come together to rent the bandstand through the Christmas season, inflating the set during the day and taking it down at night, according to the park’s rules.

“I’m really proud of my town,” Mayor George Deiss said. “I’m hoping we lit a little spark and the rest of the nation will catch on.”

The Memorare Army is praying that such examples of religious freedom do catch on. You can join the Army here to help spread that spark through prayer.