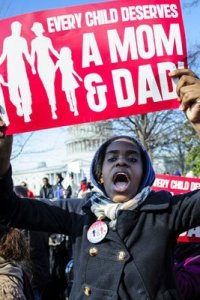 Well, it has happened. The Supreme Court of the United States legalized same-sex marriage in all 50 states in one fell swoop. Just like that, in the few moments it takes for news to be passed around, our country has been entirely changed. Just like in 1973 with the legalization of abortion.

And just like with abortion, the fight is not over, and we will still win.

This fight will take us a long time, as it is with abortion, but when did time ever stand in the way of God and his Church?

To help the fight, here is a collection of articles with original arguments against same-sex marriage, some religious, some purely scientific.

The Federalist, Why Do Progressives Resent Reality So Much?

The Witherspoon Institute, Dear Justice Kennedy: An Open Letter from the Child of a Loving Gay Parent

spike!, The Iron Fist in the Velvet Glove of Gay Marriage (this one by an atheist)
And his follow-up, Gay Marriage: A Case Study in Conformism

Fr. Z’s Blog, Laudato Si’ — It is not healthy “to cancel out sexual difference.”

There are also some articles on how to keep this fight a charitable one — as between ladies and gentlemen, rather than between rioters — and how to better understand the thought processes of those in support of gay marriage.

Word on Fire, Love, Tolerance, and the Making of Distinctions

The Catholic Gentleman, Satan Hates the Family. Here’s Why.

Can’t just sit and watch it all unfold? Add your name to the Memorare Army for Religious Freedom and join the ranks of Catholics praying for our country.