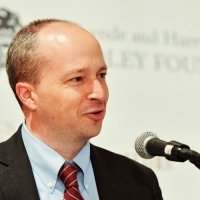 “There is a very old idea of freedom, that freedom is not the ability to do what you want, but to be free from your own unencumbered passions,” Yuval Levin said. “That idea is at the root of our society and it’s one that people argue, but they argue it in a way that makes it sound weak.”

That idea was the foundation for Levin, founding editor of National Affairs, a quarterly journal of essays about politics, society, culture, and political thought based in Washington, D.C., in his recent address on religious liberty at the second annual First Things Lecture in Washington, D.C. on November 11.

Liberal society is at war with its own moral foundations. It’s destroying them – but really, Levin wonders, what took them so long?

Pro-family activists are turning to religious liberty for their response. The Memorare Army is spearheading the prayer campaign, gathering over 3 million Memorares for religious freedom in America. You can increase the numbers even more by joining here. As a result of such activism, religious liberty is now the foremost priority for Catholics in public life.

Madison did the same when the Constitution was being written. “That diabolical, hell-conceived principle of persecution rages here,” he wrote of Virginia to his friend William Bradford in 1774. People who expressed views not strictly in line with the dominant Anglican Church were being imprisoned, and Madison’s eventual response was to ensure that religious liberty was included in the new nation’s Constitution.

Life in society is not just the playing out of principles, but of living together through it all, thick and thin. Edmund Burke described individuality as “dust and powder,” an illustration of man’s call to live in community. Religious liberty is essential for our society, but, Levin asserted, it is also both an extension and a break of our principles.

However, there is a separation and a difference between the theory and the practice of religious liberty. The two meet together in two places: in the legal arena, and in community.

Our country was founded on the principle of the separation of church and state.

In conversations about religious liberty, the free exercise clause is usually brought up: that “Congress shall make no law respecting an establishment of religion, or prohibiting the free exercise thereof.” It was originally meant to allow everyone to have their own, private religion. Naturally it was intended to protect Protestants and Jews but not necessarily Catholics.

The privacy intention meant that institutions built on more than “the mere expression of faith” were not to be tolerated. Obviously this was bad for Catholics – as it was meant to be.

Madison believed that liberty is not the freedom to do what you want, but what you must. It also then means that you cannot be coerced into doing anything against what you believe. In saying this, Madison was actually seeing to make an argument against religion, not for it. He did not want any one religion dictating to the people as an established order.

But now liberalism is operating as the established

order, with the mentality that people must and will act according to liberalism’s tenets. Individually the people can believe what they want, but in community they must act according to Liberalism. Liberalism has become the religion of the nation – exactly something that Madison and the Founding Fathers did not want.

In order to work effectively, liberalism assumes a society with a moral foundation, but not to uphold it, Levin said. Instead, it seeks to undermine it. It takes the unifying moral principles of the people and then chips away at it, leading the people to look to liberalism for their moral guidance.

The issue of religious liberty usually comes up in conversations about sexuality. Conservatives are seen as being against change, since they are against homosexual unions and transgender surgeries.

We seem obsessed with sex, talking about it all the time and bringing it into public conversations a lot, but we are not obsessed. We are reacting like we’ve been “poked in the eye,” as Levin described it – we are being attacked on the issue, so of course we talk about it. No one blames a person for talking about the fact that they have just been poked in the eye.

The late Fr. Richard John Neuhaus, in his discussions and lectures on religious freedom and living religious identity in the public square, warned his listeners that in fighting for religious protection or conscience-based exception, they should not let people think they are fighting for an overall loss of judgement. We are not advocating for people, including ourselves, to be able to do whatever we want. Rather we are fighting for the right to let our consciences judge our own actions.

The fight for religious liberty is “ultimately about the shape and structure of American life,” Levin said. Religious liberty and the subsidiarity that comes with it shapes and determines society. And the future of society, as a whole, is what we are concerned about.

But how to positively affect the future of society? By working to build appealing subcultures rather than advancing our own individual ideas of community.

Levin illustrated with an example from his own life. He lives near a Mormon church, so there is a relatively large Mormon community in their neighborhood. Levin and his wife noticed that their Mormon neighbors were all very happy people, and they wondered, “What is it that they’re doing right?”

“That is what everyone should think when they see us,” Levin said. We should attract people by our lives and the happiness we find in the religious and moral foundation our lives have.

But we must also fight for the right to live religious, attractive lives. The future we see and want is only possible if we fight now, Levin cautioned. If we stay quiet, we will give up our chance at the good, morally fruitful American society that we know we need.