Leadership for a New Generation of Catholics 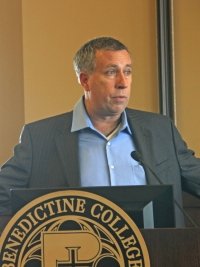 Benedictine College students, including some Gregorian Fellows, heard an energizing call to action and leadership from FOCUS founder Curtis Martin:

“Don’t use the old model. The world is in desperate need of your creativity in leadership.”

Seventeen years after founding FOCUS, Martin returned to the birthplace of his organization to speak to students about what he has learned about leadership on the journey that has taken his mission from one campus in Kansas to 113 campuses across America.

In 1998, Curtis Martin founded FOCUS – the Fellowship of Catholic University Students – at Benedictine College. It was started as a response to Pope St. John Paul II’s call for a New Evangelization. FOCUS centers on the belief that peer-to-peer catechesis is vital to the individual spiritual life of the person, and, from that, the future of the Church.

Speaking to current Benedictine College students and the FOCUS missionaries serving at Benedictine, Martin reiterated his original theory, saying that lay leadership is paramount to the Church.

Leadership itself is generic, Martin said, depending on the individual leader and their particular mission, but there are fundamentals that are true for all leaders.

One of those is the necessity for moral authority.

Leadership is not simply telling a person to do something or doing a good thing remotely. Without moral authority, no one will listen. “When you ask more of yourself than on anyone else,” Martin said, “then you get moral authority. And that gives you integrity.”

some of her new novices, he was enthralled. He and everyone else in the room listened to what Mother had to say, not because she was powerful, but because she had moral authority and integrity. Her leadership was founded on those qualities.

Martin told the students that they need to foster these qualities in themselves so they can go out and be the best possible leader that they can, both in college, immediately, and afterwards.

He spoke of how difficult and dangerous life is, even in America for those in college. “You were not aborted. The chance of being aborted is high. You were lucky enough not to be aborted. Euthanasia is here. I have a friend whose father was murdered in a hospital here. He had had a heart attack, he was recovering, he was going to live, and the hospital pulled the plug on him. They dehydrated him to death.”

FOCUS missionaries are recent college graduates, often graduates straight out of college, who are sent to campuses across the country to maintain and strengthen the faith life of Catholic students.

When Martin founded FOCUS, he did so believing that the Church’s young people were the key to their own evangelization. The growth of the organization speaks to the truth of that belief – the first two missionaries – one of whom was the future Dean of Students and head of the Gregorian Fellows at Benedictine College, Joseph Wurtz – have since expanded to almost 500.

Martin then exhorted the students to go out and fight these issues: “The solution to these problems are in your hearts and minds … Lead.”