“Lovely in Limbs”: The Ballet of the Incarnation 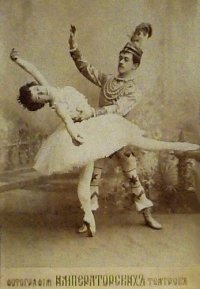 I just returned from seeing Tchaikovsky’s Nutcracker choreographed and “reimagined” by Kansas City Ballet’s own Devon Carney. My wife wanted to have a classy family outing, and it is proof of the grace and force of her person that she got her husband, five sons and one daughter to the ballet.

The daughter was an easy sell.  The sluggish males, less so.  But I have gotten into the theatre a bit at the community level, and was curious.

It was, in a word, stunning.  Breathtaking. The set design, costumes, music, all of it.  I was thinking about someone seeing an original production in 1892.  Such a theatrical event would doubtless be one of the most moving and beautiful things their eyes had ever beheld. The sheer amount of dazzling creativity presented to one’s vision is wondrous.

The story, as you know, is set at Christmastime. A magical toymaker brings a nutcracker (in now familiar soldier attire) to a little girl, Clara. Her brother Fritz, whom we would now diagnose somewhere on the ADHD scale, takes it and breaks it. The toymaker fixes it and, when Clara goes looking for it, she falls asleep on a couch and visions of sugarplums literally dance in her dreams. The tale ends leaving the audience to wonder about whether it was a dream or a reality.

It was a world-class production at a world-class venue, Kansas City’s Kauffman Center. For such a production to work, hundreds of people have to do their jobs right, from children dancers to lighting designers and sound technicians. A harp must be tuned. Mouse costumes must be made.  Ushers must ush. And dancers must spend decades to achieve the degree of mastery where complexity seems effortless.

I was reminded of my philosophy studies about beauty. It was debated in Rome at the time whether beauty was to be called a “transcendental,” one of those qualities, like one, true and good, which can be applied to any being.  An argument that always struck me was how beauty was somehow the harmony of the other three. It was enough to have a slight lack of unity of truth or goodness for beauty to vanish. It was the harmony of the others, and would evaporate if they did not play in tune. It was some sort of harmonic overtone that emerged, glorious. A perfection of perfections.

The Kansas City Ballet reached that tonight. There were moments when the set, costumes, music and dance transported the audience.  Each part of hundreds was played well, and the harmony of sight and sound was synoptic and symphonic bliss.

A phrase of Hopkins danced in my head as I had visions of sugarplums: “Lovely in limbs.”  In his amazing sonnet As Kingfishers Catch Fire he speaks of each created thing fulfilling its purpose by performing the role it was meant to play. “Each mortal thing does one thing and the same: / Deals out that being indoors each one dwells.”

Each thing declaring the truth of its being, all things playing the notes, so to speak, and doing the dance God created them to play, is the symphony of creation. It manifests the Creator. It is beautiful; but it isn’t Beauty.

It is with grace that Hopkins’ sonnet pirouettes: “I say móre: the just man justices; / Keeps grace: thát keeps all his goings graces; / Acts in God’s eye what in God’s eye he is — Chríst” Yes, I am a human being.  God made me. I can try to manifest his beauty by living a good human life. But to stay there would be to miss the whole point of Christmas. It would be to be content with a glued and patched-up nutcracker.  For, ah! There is more!

The gift of my human life was broken. But the power of the Maker remade me. He not only repaired me, he lulled me to sleep and brought me into a world I could not have dared to dream about dwelling in before. Through the gift of Christ Incarnate, God has taken a human nature, my nature, unto Himself. He dwells in me through grace, which is a sharing in his own life.  God is manifest in the beauty of a sunrise, but He dwells not in the sunrise.  If I, as Hopkins says “keep grace,” He dwells in me who thank Him for the sunrise.

In a unique way, a ballerina is both player, instrument and work of art. She is lovely in limbs. Loveliness comes through them but also dwells in them. Her limbs are both instrument and manifestation of beauty in a unified way, whereas the violin and its sound remain distinct.

And thanks to the glory of Christ’s coming, to the loveliness of his infant limbs, so like my infant limbs, God’s beauty summons me not only to be its channel but its dwelling place. I am not only called to play the notes he has composed, but to so conform my limbs to his that his beauty resides there from the cradle to the outstretched limbs of Calvary. Like a child putting on a play for his parents, Christ has choreographed the salvation of man. And every person you’ll ever meet has a role in this masterful production. And that role is none other than to be a second Christ, an Alter Christus.

Each and every one of us is his not only his creation, but also his dramatic production. Fallen through sin, God’s Mercy has transformed us from castaways to cast mates. Our limbs are lovely because we have been cast in the ballet of the Incarnation. That is a reality far more beauteous than anything we could ever dream.

Lovely in limbs, and lovely in eyes not his

To the Father through the features of men’s faces.”