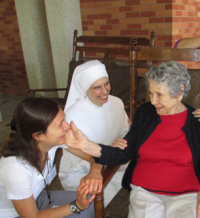 “Tuesday afternoon, a three-judge panel in Denver effectively told the Little Sisters of the Poor that they would be forced to go along with the contraceptive provisions of Obamacare and relevant regulations regardless of conscience.   If not, the sisters would be so severely fined by the federal government that they would have to close their doors.

“In one of the most cynical ploys I have ever seen come from this or any White House, the administration crafted a regulation making an “exception” to the contraceptive mandate giving these servants of the elderly poor and other religious non-profits the “option” to salve their consciences by simply signing a Federal Form 700 declaring their objection is based on a matter of conscience.” Click here to read the rest of his argument.

Kessler warned of dark times ahead for Catholics:

“In many ways the situation the Little Sisters of the Poor are mired in is but a part of a larger effort by federal courts to reshape the First Amendment by marginalizing the ability of religious organizations to take ministries into the public square.  The Supreme Court in the recent Obergefell v. Hodge (dealing with state marriage laws deemed discriminatory to same-sex couples) created a conundrum for churches where marriage was concerned.  Justice Kennedy told clergy not to be overly concerned about religious freedom.  After all, he asserted, no one would keep them from preaching their doctrines in their churches, synagogues, or mosques.

“If the lessons of Europe are any model, advocates of a “new morality” will bring suit to require federal prosecutors and courts to pressure pastors to mold their sermons to fit the “new morality,” recently given the imprimatur of federal judges in cases like Obergefell.   Those who would question this “new orthodoxy” are already being castigated as bigots or worse.  Sermons could be labeled hate speech or before long child abuse when the discriminatory old morality is taught in religious schools.”

To learn more about the Memorare Army for Religious Liberty or to join in our prayer campaign, click here.