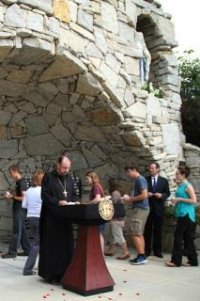 Benedictine College students have started a new initiative: Every day at 3 p.m., when the Dining Hall clock strikes the hour, students will stop whatever they are doing and pray a Memorare, followed by the words “Jesus Christ, have mercy on us.”

Representatives of the women’s Marian group FIAT (more information), the men’s group Knights of the Mystical Rose, and the Legion of Mary made the announcement on Sept. 8, the Nativity of Mary, at Mary’s Grotto on campus.

The Mercy Memorare consists of a Memorare prayer followed by the words “Lord Jesus Christ, Have mercy on us” prayed each day at 3:00 p.m.

“We are asking that when the Marian hymn begins to chime at 3:00 p.m., we all pause, stop what we are doing, no matter where we are, say the prayer — and then continue on with our day,” said Fiat’s Molly Minnis. “We believe the graces this community will receive will be immeasurable and will continue to remind us of the love we have for Our Lord and Our Lady.”

Memorare Army members are encouraged to join in the Mercy Memorare  — every day, at the 3:00 p.m. hour, pray a Memorare for religious freedom and mercy for America. This will join the efforts of the Memorare Army with the many hundreds in the Benedictine College community praying at the same time.

The Knights’ Logan McCully, a junior at Benedictine College, described how the proposal came about.

“Knowing that Pope Francis named this a

Holy Year of Mercy, we are proposing to emphasize the time of our campus’s daily Memorare in line with the hour of our Lord’s death,” he said.

He added that the Memorare was chosen to acknowledge the trust the school has put in Marian intercessory prayer and as a way of daily recalling and renewing the college’s consecration to the Blessed Virgin Mary.

Father Jay Kythe, the college’s associate chaplain, was present at the announcement to bless the students. He suggested that students could set their phone notifications to remind them to say the prayer every day at 3:00 p.m.

Abbot James Albers of St. Benedict’s Abbey led the students in the hymn “Immaculate Mary” as they processed through the Grotto with candles. When the campus clock chimed the hymn for 3 p.m., Abbot James led the inaugural Mercy Memorare in the Grotto.

“This is a beautiful proposal from our students,” said Stephen D. Minnis, president of the college. “This idea, which is being put into action beginning today, will truly unite the campus in prayer and ask our Mother for her continued care and protection.”

He said he hopes students, alumni and friends of the college will carry out the practice on and off campus. “Our hope is that this time of prayer will be carried forth long after our students leave Benedictine College.”