November and the Four Last Things 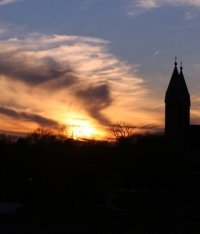 Only Friendship with Christ Survives Death

“I am glad you are here with me. Here at the end of all things, Sam,” the hero of The Lord of the Rings says to his faithful companion as the novel’s plot winds down.

They are comforting words that have a strange power: being at the side of a real friend, when weighed against “the end of all things,” actually seems to hold its own.

This is why people visit gravesites; we don’t give up on people just because they’re dead. But the tragedy of death though is that we eventually do stop visiting their graves when we die; and those who visit our graves also all eventually die.

The only friendship that will ultimately survive death is the death of the one person who outlasted death, and that is Jesus Christ.

This is the great truth of the crucifix. It is the ultimate “I am here with you, here at the end of all things.”

But as comforting as the crucifix is about death, it is also sets a frighteningly high bar for “friendship.”

Jesus died when he was 33, and the Church year has 33 Sundays of Ordinary Time, the last of which was yesterday. The Mass said horrifying things to mark the occasion.

“Some shall live forever,” said the first reading, “others shall be an everlasting horror and disgrace.”

Gospel acclamations are usually cheery, vigorous aspirations. Yesterday’s told us to “pray that you have the strength to stand before the Son of Man.”

The Last Judgment in the Gospel of Matthew makes clear that we can betray Jesus without ever doing so explicitly, to his face. To ignore the needy around us is as clear a betrayal of Jesus as it would be for us to refuse to open the door for him in a blizzard.

This is hard for us to face. We live in a world that is formed by marketing. We have gotten used to evaluating not by quality but by image: Things are as good as their logo, or their cultural cache, or their effectiveness with key demographics.

Facing God’s judgment is the opposite of marketing. God doesn’t care if we have a reputation for holiness or if we have all the right religious aspirations. He only sees our heart for him as reflected in our encounters with his sons and daughters.

“In the evening of life, we will be judged on love alone,” said St. John of the Cross. God help us.

Hell Is the Everlasting Boredom of Those Who Reject Love

The Catechism frighteningly says we have real power, power to choose Christ forever—or to reject him forever.

The choice to love is the choice to break out of yourself and give yourself to others. Do that and you meet Jesus Christ, the author of life himself.

The choice to sin is the decision to betray your best friend. Do that and you ape the actions of Satan, the author of death.

Mexican bishops recently worried that their own nation was in the grip of hell, as Drug Cartels became increasingly fiendish, decapitating bodies and hanging them from billboards. We see the same morbidity elsewhere: ISIS militants look like grim reapers with their robe off, and turn their killings into twisted fantasies of death.

But we aren’t that much better off in America. Leading television shows focus on sick crimes. In video games, we play-act mass destruction. Hollywood horror franchises such as Saw have descended into bizarre new depths. Our culture has become so desensitized to death that there is hardly an outcry when it turns out Planned Parenthood is selling our neighbors’ babies’ body parts.

This is what life looks like when boredom becomes the biggest fear and entertainment the greatest commodity, and first hope and then conscience goes.

Which is what hell looks like: giant boredom wallowing in death.

Heaven Is the Fulfillment of the Desire That Eludes Us

Ironically, some people complain that it is heaven that sounds boring—an endless succession of days, each one like the last.

Pope Benedict XVI tried to correct that misimpression in his encyclical Spe Salve but had to lapse into strange, hard-to-understand phrases, calling heaven “the supreme moment of satisfaction, in which totality embraces us and we embrace totality.” Heaven is “plunging into the ocean of infinite love,” or “plunging ever anew into the vastness of being, in which we are simply overwhelmed with joy.”

I like the comparison of heaven to nostalgia. Just as nostalgia strips away all of the dross from a moment in time, heaven will be a pure experience of joy. It is the fulfillment in light that the darkness of hell imitates.

Marketing mimics nostalgia by promising a pure experience that doesn’t exist. It teases a desire that cannot be satisfied on earth.

But it can be satisfied somewhere … in the place where, in the presence of pure being, we will finally be pure.