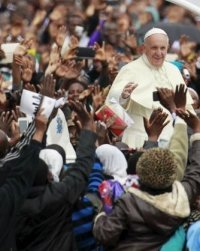 Pope Francis went to Africa last week, and we saw a smattering of news from the event: His words on climate change and ecology in particular. But what was left unreported was his vigorous sharing of the Gospel message.

Here are my Top 10 favorite quotes of the Pope in Africa.

1. He called people to repentance using an old metaphor to talk about our spiritual struggle: The Old Adam.

“All the baptized need to continually break with the remnants of the old Adam, the man of sin, ever ready to rise up again at the prompting of the devil … How easy it is to be led into selfishness, distrust, violence, destructiveness, vengeance, indifference to and exploitation of those who are most vulnerable … Each of us, in his or her heart, can ask the crucial question of where we stand with Jesus, asking what we have already accepted – or refused to accept – in responding to his call to follow him more closely.”

2. Everywhere he went, he called insistently for prayer, especially when he met with young people.

“Prayer is powerful! Prayer conquers evil! Prayer makes you draw near to God who is all-powerful. Let me ask you a question: Do you pray? I can’t hear you! [the young people respond: Yes!]. Don’t forget this! … I ask you also to pray for me, so that I can be a good bishop, a good Pope.”

3. He told them never to compromise Gospel principles.

“Devoting time to prayer and the reading of Scripture, especially the Gospels, you will come to know him, and yourselves, ever better. … I encourage you to maintain an alert and critical spirit in the face of every compromise which runs contrary to the Gospel message.”

4. He called Christians to rise up in the face of the powers of Hell.

“It is amid unprecedented devastation that Jesus wishes to show his great power, his incomparable glory  and the power of that love which stops at nothing, even before the falling of the heavens, the conflagration of the world or the tumult of the seas. God is stronger, more powerful, than all else. … Even when the powers of Hell are unleashed, Christians must rise to the summons, their heads held high, and be ready to brave blows in this battle over which God will have the last word. And that word will be one of love and peace!”

Mass at the Cathedral of Bangui (Central African Republic) Nov. 29.

5. He called them to a witness worthy of martyrdom.

“The blood of the martyrs runs in the veins of the Catholics of Uganda. Don’t ever forget that! That way you will keep the faith. … The Church in Uganda must never let the memory of those martyrs fade. A martyr is a witness. To remain faithful to that memory, the Church in Uganda has to continue to bear witness; you must not just live off this legacy. Past glories were a beginning, but you are called to create future glories. This is what the Church asks of you. Be witnesses like the martyrs, who gave their lives for the Gospel.”

6. He reminded them that serving the poor is the one path to heaven.

“The Lord tells us, in no uncertain terms, that is what he will judge us on! … As Christians, we cannot simply stand by, stand by watching what is happening, without doing anything. Something must change! Our families need to become ever more evident signs of God’s patient and merciful love, not only for our children and elders, but for all those in need. Our parishes must not close their doors, or their ears, to the cry of the poor. … For in those whom we serve, Christ daily reveals himself and prepares the welcome which we hope one day to receive in his eternal kingdom.”

Visit to the House of Charity of Nalukolongo, Kampala (Uganda), Nov. 28.

7. He presented a great metaphor for the spiritual life to young people.

“Have you ever seen a little child who stops in front of a dirty puddle on the path ahead of him? A puddle he cannot leap over or go around? He may try but then he stumbles and gets soaked. Then, after many attempts, he calls out to his father, who takes his hand and swings him over to the other side. … God is there to take our hand, if only we call on him. All of us have to be like that little child, even the Pope!”

8. He recommended rejecting online pornography by calling on martyrs of purity.

“What would the Uganda martyrs say about the misuse of our modern means of communication, where young people are exposed to images and distorted views of sexuality that degrade human dignity, leading to sadness and emptiness? What would be the Uganda martyrs’ reaction to the growth of greed and corruption in our midst?”

9. He told them to refuse the sweet lies of the corruption rampant in government.

“There is corruption not just in politics but in every institution, even in the Vatican. Corruption is something which creeps in. It’s like sugar: it’s sweet, we like it, it goes down easily. And then? We get sick! We come to a nasty end! With all that easy sugar we end up as diabetics, and our country becomes diabetic! Whenever we take a bribe, or pocket a kickback, we destroy our heart, we destroy our personality, we destroy our country. Please, don’t get used to the taste of this ‘sugar’ which is corruption.”

10. He told them what he always carries in his pocket.

“In my pocket I always carry two things: a rosary, to pray, and something else which may seem a little odd … What is it? It’s the story of God’s failure: it is a little Way of the Cross, the story of how Jesus suffered from the time he was condemned to death until his burial. With these two things, I try to do my best. But thanks to these two things I don’t lose hope.”

BONUS QUOTE: He called for priests and religious to be able to “weep” for their flocks.

“Do you remember any time in the Gospel when the apostle James wept? Yes or no? Or when did the apostle John wept? Or when did any other apostle wept? The Gospel tells us that only one of the apostles wept: the one who knew that he was a sinner, so great a sinner that he betrayed his Lord. And once he realized this, he wept… Then Jesus made him the Pope! Who can understand Jesus? It’s a mystery!