Peter Kreeft, C.S. Lewis, and the Existence of God 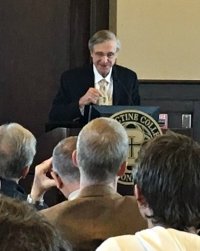 Students, faculty, and half-marathon runners at Benedictine College gave up two hours of their Saturday morning to crowd into an overflowing room and hear a lecture arguing for the existence of God.

On Saturday, November 7, the Gregorian Institute brought Dr. Peter Kreeft to Benedictine College to discuss C.S. Lewis’s argument for the existence of God, the Argument from Desire, which Kreeft called “the most intriguing argument in all of human thought, because it argues for both the existence of God and heaven. It is more moving, arresting or apologetically effective than any other argument.”

Kreeft has publicly argued for the existence of God with members of various world religions and with atheists. At these debates, he asks the other people on stage with him if they want there to be a heaven. The atheists say No, that they are perfectly content with the physical world and that they don’t want there to be a heaven after death. Kreeft’s only explanation for this strange worldview is that atheists do have a desire for heaven, but don’t or won’t admit it, even to themselves.

There is an innate desire, Lewis and Kreeft argue, that is never satisfied, no matter what we do. “There is an infinite Something that is always more than one’s idea,” Kreeft said, and only that Something can satisfy us.

“Do an experiment,” he told the room. “Imagine God came to you, and you knew that it was really God, that there was no doubt, and he offered you everything in the entire world, but if you choose it, you could never see him again for all eternity. What would you choose?

If you have not chosen the world, look what you’ve done. You have chosen God before the world.

The desire for God is greater than the actual satisfaction of all other desires.”

Kreeft cited Ecclesiastes 3:11: “God has made everything appropriate to its time, but has put the timeless into their hearts so they cannot find out, from beginning to end, the world which God has done.”

“The heart was not designed at Harvard or at

Hollywood but in Heaven,” he noted. And that is why nothing in this world, even a degree from Harvard or anything offered by Hollywood, can satisfy the heart.

“How can you correct a mistake except by a standard of truth?” Kreeft asked. There are some things you cannot not know, and truth is one of them. “Knowledge of ‘better’ means there’s a knowledge of ‘best,’” he continued, “even if you’ve never experienced it.”

This idea is what drives the heart in the pursuit of the Something that can satisfy it. No matter what we experience, no matter how happy we are in this world, there is always a sense that it could be better. And that feeling leaves us unsatisfied.