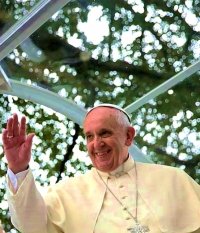 Pope Francis has given us a big, beautiful, challenging encyclical in Laudato Sí, “On Care for our Common Home.”

It is a brilliant work — a work that takes the opening the world has offered through its concern for the environment and uses it to passionately demand radical conversion.

This is the Pope who once said: “With these two things you have the action plan: the Beatitudes and Matthew 25.  You do not need to read anything else.” Now he has left us a detailed, bold application of the central Gospel teachings of living simply for others.

But it would be silly not to acknowledge that he has also left us a bit of a mess — a “mess” in the sense that Laudato Sí  has several strands tangled through it, some of which seem to contradict each other.

It is really a work making several arguments at once, such that it is hard to keep them all straight: The “beauty will save the world” argument (I marked those in blue in my copy); the “technology is killing the soul” argument (red); the “real ecology embraces human dignity” (yellow); the “market vs. state solutions” discussion (brackets); and the “love of God compels us” argument (vertical blue lines).

There are also the “best of bishops’ councils documents” citations, the “best household practices” section, and a neat little précis on salvation history, including the Babylonian exile.

Perhaps the different threads got away from their author, too:

● The encyclical is careful at first to say that “a scientifically determinable cause cannot be assigned” to global warming (No. 23), but then, later, emphatically denounces “The warming caused by huge consumption on the part of some rich countries …” (No. 51).

●  The encyclical warns against population control solutions and points out the failure of politics; but then it refers  (following a long papal tradition) to an “urgent need of a true world political authority” (No. 175) ignoring for the moment that these are notorious for aggressive population control.

● Because of a stray example used in the encyclical, Catholics will now have to spend a lot more time talking about the ethics of air conditioning than we planned to.

In the end, though, the encyclical’s “mess” delivers some powerful points, and the Pope is humble in what he is asking. He is directing his encyclical to every human being. (He adds that he is therefore not creating doctrinal claims: “On many concrete questions, the Church has no reason to offer a definitive opinion; she knows that honest debate must be encouraged among experts while respecting divergent views” [No. 6].)

At the same time it is instructive to see what Pope Francis wants to teach the world.

He wants them to know that creation is “a gift from the outstretched hand of the Father of all” (No. 76).

He teaches them to avoid ideologies that sum up the world by one aspect of its truth or another, by saying that “Rather than a problem to be solved, the world is a joyful mystery to be contemplated with gladness and praise” (No. 12).

He refuses to go along with those who want to make the way forward dependent on a system or on someone else: “Many things have to change course,” the Pope writes (No. 202), “but it is we human beings above all who need to change.”

He introduces the world to the concept of sin, of how we offend God, by saying: “To commit a crime against the natural world is a sin against ourselves and a sin against God,” he writes (No. 8, citing Patriarch Bartholomew).

He warns them of those who lie to them to sell their products, and tempt them into “a whirlwind of needless buying and spending” that “leads people to believe that they are free as long as they have the supposed freedom to consume. But those really free are the minority who wield economic and financial power” (No. 203).

Catholics can be proud that we have a Pope who can say these things because he has backed them up with a life of living what he preaches. The change he advocates is radical: Living simply, for others, without trying to change everything about reality. What the Pope is doing is teaching the world to embrace the heart of the Gospel.

And as irksome as some of the encyclical might be to us Catholics in the West, the greatest tragedy of all is that he cannot simply say, “Live as we Catholics live.”