Raven On Hand for Little Sisters of the Poor Meeting 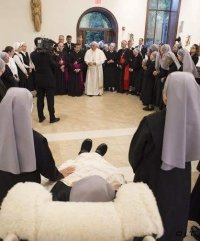 Several Ravens encountered Pope Francis when he visited the United States — including Benedictine College President Stephen D. Minnis and the Sister Anne Shepard, OSB, Prioress of Mount St. Scholastica Monastery and member of the college’s board of directors.

She is a Second Year Novice with the Little Sisters of the Poor in Queens Village, N.Y., and she was present for the surprise visit Pope Francis made to the congregation’s house in Washington, D.C., to encourage the sisters in their work and in their religious freedom stand against the HHS Mandate.

Megan Spelic graduated in 2013 as a journalism major and took the religious name Bernadette Rose. She has been active with the college since then, creating a Benedictine College quilt from her Raven gear to raise money for other students with religious vocations.

She said she was waiting for the canonization Mass of St. Junipero Serra to start when her superior got a text message saying that the Pope would be visiting their house.

That night at 6:45 p.m., police cars and flags filled the street and Pope Francis arrived in a Fiat.

“He just walked through our chapel doors and there were probably 35 sisters ready to greet him,” she said. “He made his rounds to every single one of us and took time to talk to us. Each of us. We even have this little Columbian sister who is 102 years old. He asked her if she still likes wine. She said ‘No, no, no! Only café.’ He smiled and said ‘Very good. Me too.’”

When it was Sister Bernadette’s turn, she said, “Hello papa. We’re praying for you.”

“He looked at me and smiled,” she said. “I held the hand of the successor of Peter, and his gaze was like Jesus looking into my soul.”

“I’m still kind of trying to take it in. The more I think about it, I still have a hard time believing it happened,” she said. “It really affirmed me in my vocation. It really boosts my confidence to live this life of virginity for the Church and for the Lord, which can be difficult.”

She said Pope Francis gave the sisters an off-the-cuff speech.

“He said our work isn’t appreciated, helping the elderly, which it is the hardest work, but it is for Jesus. He said every day you need to sing into his ear. Sing, ‘I love you Jesus. I’m doing this for you.’ Then he would say if it’s just one of those days when everything is hard, you can look at that difficult resident and say, ‘You know, Jesus, you’re really being a nuisance right now. You are really being spoiled, Jesus!’ He shook his finger when he said it.”

She appreciated the quiet, familiar visit.

“When I watched him going into all these crowded, loud atmospheres, taking selfies with teens, meeting kids in Harlem, it really made me appreciate what we had,” she said. “Our meeting was just so intimate. That’s the word that keeps coming back to me. It was so intimate.”

She had words of advice for students at Benedictine College.

“Stay up to date on the Holy Father,” she said. 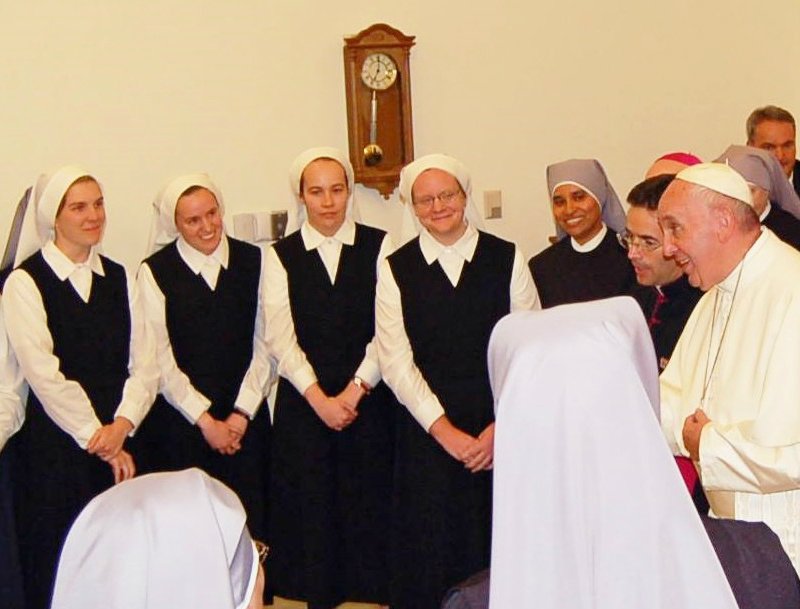 “I look back and think about the monks and sisters and the education. It has really prepared me for religious life in general, and the contemplative life. Having all that prayer time and all that time to go to Mass and the atmosphere on campus prepared me so much for life after Benedictine. I don’t regret anything about Benedictine.”

But she wasn’t the only one who saw the Pope in Washington.   Far left, Sister Bernadette Rose

President Stephen D. Minnis was on hand for the Pope’s visit to the U.S. Capitol.

“You could feel a real tangible sense of peace and joy among the people present,” he said. “People were not just happy and excited, but joyful.”

This was the second Pope he has seen in Washington. “Seven years ago, in 2008, I was blessed to see Pope Benedict XVI when he visited with university presidents. He told us to love our students. This year, seeing Pope Francis at the U.S. Capitol reminded me of that. You could see that Pope Francis truly loves his flock.”

“Our theme for the year — Called to Greatness — fits what Pope Francis is asking of us,” he added. “He wants us to reach more and more people with the unchanging message of the Gospel, with joy.”

“He is unafraid to speak the truth of the Gospel as he knows it and lives it,” she said. “From the moment we stepped off the metro-rail at Catholic University of America, joy was in the air. Five Benedictine women ventured together, four prioresses of monasteries and one novice, our own Novice Jodi Hart.”

Sister Anne said she has experienced papal audiences before, but never a canonization.

“It was like a gift I had never had before,” she said. “I love Pope Francis.  I love my community and my vocation.  I love the Church in which I was raised and to which I belong.  And I am so grateful I went to the historic event yesterday.”

“The face of the Holy Father, though at times looking weary, was joyful,” she said. “He loves the common people.”

Founded in 1858, Benedictine College is a Catholic, Benedictine, residential, liberal arts college located on the bluffs above the Missouri River in Atchison, Kansas. The school is proud to have been named one of America’s Best Colleges by U.S. News & World Report as well as one of the top Catholic colleges in the nation by First Things magazine and the Newman Guide.  It prides itself on outstanding academics, extraordinary faith life, strong athletic programs, and an exceptional sense of community and belonging.  It has a mission to educate men and women within a community of faith and scholarship.