Sunday: Be a Child in God’s Story 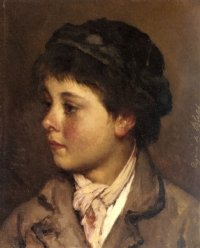 This Sunday’s Gospel (the 25th Sunday in Ordinary Time) is one of those where it’s easy to feel superior to the apostles. Jesus catches them arguing about who is greater and he puts a child in their midst, telling them they will be judged on how they treat the least ones.

It’s true: We do not often argue with each other about who is greater. But perhaps this is because we are less straight forward and less honest than the apostles. A brief examination of conscience will reveal that we’re not all that different from the apostles after all.

We may not ever say we’re greater — but how many of our decisions are driven by the desire to make that point, all the same?

We argue that we’re greater in small ways and large. In conversations, we tell tales of our encounters with people we feel qualified to ridicule, and make subtle but meaningful references to the shortcomings of others.

When we tell our stories, we reinterpret almost everything that happens to us as a triumph of me, the indomitable hero.

It’s at this point that Christ wants to put a child in our midst and tells them that they will be judged by whether they receive such a child as they would receive Christ.

You have to be humble and attentive to receive a child with that kind of attitude.

It is not that children are invariably sweet and docile. Children have their egos too. But children start from, and live in, a position of secondary importance.

It is this position that Christ wants us to take in relation to him. A child is not the protagonist of his own story yet; he is a bit part in the story of someone else’s story — his parents’. We aren’t ultimately the protagonist of our own story, either.

The story we are in stars Christ, and his saving action for his people. He gives us a walk-on part in that story, not a starring role.

Christ himself became a model of how we are to consider our part in the story. The first reading — from Isaiah, prophesying about the suffering servant — shows how Jesus planned from the beginning to be reviled, tortured and put to the test.

The second reading sums up the lesson: “Where jealousy and selfish ambition exist, there is disorder and every foul practice,” says the letter of St. James. “But the wisdom from above is first of all pure, then peaceable, gentle, compliant, full of mercy and good fruits, without inconstancy or insincerity.  And the fruit of righteousness is sown in peace for those who cultivate peace.”

It’s a freeing lesson to learn. It saves a lot of argument about who is the greatest.