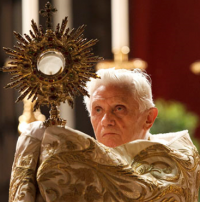 This Sunday’s readings (the 19th Sunday in Ordinary Time, Year B) show how God treats the Church when it has lost its way.

As Pope Benedict XVI put it, in the Way of the Cross he led shortly before he became Pope, we have all lived through such a time:

“How often is the holy sacrament of his presence abused; how often must he enter empty and evil hearts! How often do we celebrate only ourselves, without even realizing that he is there! How often is his word twisted and misused! What little faith is present behind so many theories, so many empty words! How much filth there is in the Church, and even among those who, in the priesthood, ought to belong entirely to him! How much pride; how much self-complacency! What little respect we pay to the Sacrament of Reconciliation, where he waits for us, ready to raise us up whenever we fall!”

Elijah in the first reading is experiencing a moment darker than what the Church experiences today. Israel has strayed far from the law of Moses. Baal is as popular as the Lord. Jezebel has ended Elijah’s ability to serve the people – and plans to end his life.

Enough is enough. Elijah is ready to lie down in the desert and die.

But then something miraculous happens. “An angel touched him and ordered him to get up and eat. Elijah looked, and there at his head was a hearth cake and a jug of water.”

He ate and drank, but still didn’t have the heart to fight. He lay down again.

“But the angel of the Lord came back a second time, touched him, and ordered, ‘Get up and eat, else the journey will be too long for you!’”

Elijah was transformed. He “got up, ate and drank; then, strengthened by that food, he walked 40 days and 40 nights to the mountain of God, Horeb.”

In the Gospel, the same question arises and the same answer.

The son of God himself is speaking to his chosen people after showing them a great sign. But they “murmur against him” and eventually reject him. His great announcement of the Eucharist leads directly to his death.

“Is this not Jesus, the son of Joseph?” say the Jews. “Do we not know his father and mother? Then how can he say, ‘I have come down from heaven?’”

That’s the same problem we have in the Church today, too. We forget that Jesus is divine. We make him merely human. Then the story of the Church is our sin and not his life.

When we worry about the state of the Church and lose God’s place in it all, we are in Elijah’s position and stand in need of exactly what Elijah needed — bread from heaven and a voice of encouragement.

Today Jesus gives us that. “Everyone who listens to my Father and learns from him comes to me,” he says. “I am the living bread that came down from heaven; whoever eats this bread will live forever; and the bread that I will give is my flesh for the life of the world.”

Barley cakes gave Elijah the strength to rise and be on his way for the long journey ahead. The Eucharist gives us even more.

“Lord, your Church often seems like a boat about to sink, a boat taking in water on every side. In your field we see more weeds than wheat. The soiled garments and face of your Church throw us into confusion. Yet it is we ourselves who have soiled them! It is we who betray you time and time again, after all our lofty words and grand gestures. Have mercy on your Church; within her too, Adam continues to fall. When we fall, we drag you down to earth, and Satan laughs, for he hopes that you will not be able to rise from that fall; he hopes that being dragged down in the fall of your Church, you will remain prostrate and overpowered. But you will rise again. You stood up, you arose and you can also raise us up. Save and sanctify your Church. Save and sanctify us all.”