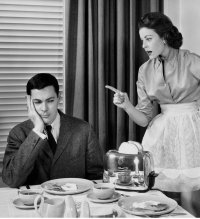 That’s the phrase that echoes through this Sunday’s readings (the 21st Sunday in Ordinary Time, Year B).

Peter says that when he explains why he will not leave  like the multitudes who are streaming away from Jesus at the time. They are scandalized by what Jesus has said: They must eat his flesh and drink his blood. Such a command was totally contrary to the culture’s expectations — and they refuse to entertain the thought that it might mean something less harsh than the worst it could mean.

Peter’s answer amounts to a very laudable Catholic intellectual response: faith seeking understanding, the definition of theology. He does not understand what Jesus wants, but he is willing to accept what Jesus says, given who Jesus is, while he tries to figure it out.

In our culture, what St. Paul says in the second reading has very much the effect that Jesus’ words about the Eucharist had. St. Paul exhorts women to “be subordinate” to their husbands. We are scandalized by what he said. It is totally contrary to our culture’s expectations — and we refuse to entertain the thought that it might mean something less harsh than the worst it could mean.

I like to point out that if it said the opposite of what it says, it would shock us even more:

“Wives should lord it over their husbands, for the wife and husband are separate, not united like the Church and Christ.

“The husband is not the head of his wife; he should not consider himself one body with her.

“Wives, push back against your husbands in everything.

“Husbands, do not love your wife as Christ loved the Church. Do not suffer for her.”

That sounds absurd as an exhortation, but it might be a fairly accurate description of what too many marriages become.

The bottom line for the reading from Ephesians is its first line: “Be subordinate to one another out of reverence for Christ.” This isn’t a call for dominance; it’s a call for humility and unity.

Keeping that in mind, realize the wisdom in the marital advice in the letter.

It happens to be the same advice modern psychology gives. The complaints husbands and wives make about each other are often summed up as the “nagging wife/distant husband” pattern.

While calling the two mutually subordinate, the reading undeniably makes a special point of the wife’s submission. But modern marriage advice seems to concur: Women are often  reminded to be more mild and accepting, less critical and disapproving. They are warned not to mother their husbands or be too controlling.

Next, consider the advice to husbands: “Husbands, love your wives, even as Christ loved the church and handed himself over for her to sanctify her … husbands should love their wives as their own bodies.”

This also seems suited to the most common experiences women have of their “distant husbands”: “My husband doesn’t talk to or listen to me,” “he only pays attention to me when he wants intimacy,” “he doesn’t show any interest in me or what I do,” “he spends time on his own pursuits, ignoring the family.”

The real lesson of the reading is that all of this advice will only work if it is done “out of reverence for Christ.”

That is the same lesson Peter learns in today’s Gospel.

When many of Jesus’ disciples abandon Jesus, Peter stays and the apostles stay with him.

“Master, to whom shall we go?” says Peter. “You have the words of eternal life. We have come to believe and are convinced that you are the Holy One of God.”

In our own married life, if things become difficult, we can say the same thing. We don’t always see the benefit of sticking it out through disappointing times, but we know we are supposed to do so in order to stay close to the Lord. If we do, statistics show that it tends to work out all right. Marriages go in cycles from lower satisfaction to higher satisfaction. Those who leave at the low point of the cycle are likely to start a new cycle with someone else, and find themselves before long back at the bottom. Those who stay in their marriage tend to cycle back up, learn about each other from the experience, and not dip quite so low again.

So if for no other reason we stick to our marriage because our faith says so, we may find reap the benefit sooner or later anyway.

We can pray “Master, to whom shall we go?” — or  the words from the first reading: “As for me and my household, we will serve the Lord.”

Staying close to Christ is our one chance at happiness.