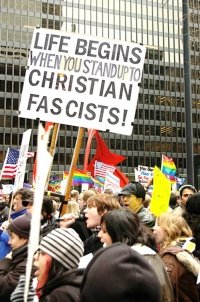 In Sunday’s Gospel, Jesus has a tough time preaching in his home town of Nazareth.

“Where did this man get all this?” they ask. They know his family (there was no Hebrew word for “cousins,” and so here, as elsewhere in the Bible, “brothers” and “sisters” are used) and they know him — and they don’t like being talked to this way by one of their own. They refuse to heed his warning. Even though they acknowledge that he has accomplished “mighty deeds,” they still “take offense at him.”

The situation is so bad that the Gospel says Jesus “was not able to perform any mighty deed there, apart from curing a few sick people by laying his hands on them. He was amazed at their lack of faith.”

“A prophet is not without honor,” says Jesus, “except in his native place and among his own kin and in his own house.”

On the one hand, those words can be a comfort to us. Our religious message is unpopular in America right now, but we are in good company: Jesus himself had the same experience.

On the other hand, these words can be used as a bad excuse for complacent, self-righteous self-pity.

We know the truth about sin and sorrow, and virtue and happiness. We have seen people broken and unhappy because of their relationships and lifestyles, and we know the secret to happiness.

But we are treated as “haters” when we try to share the good news. How dare they treat us that way?

We can fancy ourselves persecuted prophets and decide that we are exempt from sharing the truth to an ungrateful audience.

There is a third way to understand his words: Prophets tell the truth regardless of how it is received. The lack of honor should make no difference. It isn’t honor that we are looking for in the first place – or if it is, it shouldn’t be.

After all, look at the first reading. In it, Ezekiel is sent explicitly to a “rebellious house.”

“Hard of face and obstinate of heart are they to whom I am sending you,” the Lord tells him. “But you shall say to them: ‘Thus says the Lord God!’ And whether they heed or resist — for they are a rebellious house — they shall know that a prophet has been among them.”

St. Paul in the second reading also shows how sharing God’s warning can be a thankless task.

God knows how complacent people can get. “That I, Paul, might not become too elated,” says the reading from Second Corinthians “a thorn in the flesh was given to me, an angel of Satan, to beat me, to keep me from being too elated.”

It isn’t clear what this thorn is. It is either a sickness or disability or it is an experience of opposition. At any rate, it is a suffering that Paul has to endure even while he does the will of God.

So he does: He suffers “weaknesses, insults, hardships, persecutions and constraints for the sake of Christ.”

The Gospel even shows what approach to take with his thankless hometown: He cured a few people who were sick and were willing to speak about spiritual things. He focused his attention on those who would listen, without neglecting to widen the circle with those who rejected him.

We can do the same: Do good things, speak naturally about your faith, when it comes up.

It won’t be easy. Today’s readings acknowledge that. But they also say that you don’t get a pass just because it’s tough.