Sunday: Reverse the Fall Each Sunday 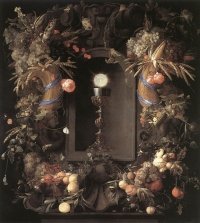 This Sunday, the 20th Sunday in Ordinary Time (Year B), continues the project of the past Sundays’ readings of focusing on Jesus’ words from Chapter 6 of John’s Gospel. Those words — the command of Jesus to eat his flesh and drink his blood — can sound extreme.

They need a little background to understand — or, better, a giant background.

Scholars, poets and storytellers throughout history have told and retold the story of Adam and Eve eating the forbidden fruit.

The poet Milton emphasizes the degree to which the Fall transformed Adam and Eve. He describes the cosmos being separated into two camps: the rebellious demons and the good archangels.

When Adam and Eve eat the forbidden fruit, they don’t just commit a sin and doom themselves personally; they move themselves and their children from one camp into the other. They leave the huddle of the archangels’ team and cross the line.

Says the Catechism: “By our first parents’ sin, the devil has acquired a certain domination over man, even though man remains free. Original sin entails ‘captivity under the power of him who thenceforth had the power of death, that is, the devil.’”

This dramatic shift in our allegiance presented God with a problem. He had to win us back. And the remedy for the Fall had to take into account the nature of the sons of Adam and Eve: free human beings, soul and body composites, who make choices for themselves.

The remedy Jesus offers is the sacraments, culminating in the Eucharist.

The Eucharist is the crowning achievement of salvation history. It is the surprising counteroffer God gives to mankind.

Adam and Eve believed the devil when he said they would be “like gods” if they ate the fruit.

God gives us the Eucharist — his body, blood, soul and divinity — which really does make us sharers in divine life when we eat it.

Not only do we get to make a counter-choice to Adam and Eve’s fall. We get to choose God, directly, again and again, by receiving communion every week, or even every day.

With the forbidden fruit, we left the intimacy of life with God to become his opponents. Through the Eucharist, we regain that intimacy to become his body, the Church.

But just as the fall of Adam and Eve changed them, the Eucharist has to change us, too.

We have to radically leave our way of life and enter a life of God’s grace.

This doesn’t happen automatically. The second reading warns that we are just one significant betrayal away from leaving God behind.

Adam and Eve were exiled. If we stay vigilant, watch and pray and choose God, our destination is once again the opposite of theirs.

The first reading today describes the home we are invited to — God’s home. The description matches descriptions of ancient Palestinian homes, with seven columns. The seven columns recall for us the seven sacraments that support our life in God’s home. And the impressive spread of food and drink recalls the wedding feast at Cana, the heavenly banquet and the great meals of Christ’s parables.

This is what life in God’s family looks like: grand provisions in a cozy house.

And if we choose God and allow him to reverse  the choice of Adam and Eve in our lives, we will find that this beautiful house is ours for all eternity: “Unlike your ancestors, who ate and still died, whoever eats this bread will live forever.”